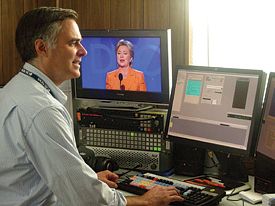 DENVER
CBS News arrived in Denver to cover the Democratic National Convention less than a month after the "Tiffany network" commenced broadcasting the evening news in HD on July 28.

"We immediately started getting rave reviews for the quality of our video and audio compared to the other networks," said Walt Leiding, technical supervisor and editor for CBS News, who worked from a multi-trailer compound in the Pepsi Center parking lot this week.

Walt Leiding, technical supervisor and editor for CBS News, used an Avid NewsCutter Nitris to edit coverage of last month's Democratic National Convention in Denver. "I'm sure the reason is that CBS News is broadcasting in 1080i instead of 720p like ABC and the others," he said, "so even when we were carrying the same pool feed as everyone else, our signal has been superior."

Live and edited signals from CBS News at the DNC in Denver passed through Fujutsu MPEG-4 encoders for transmission by Level 3 over ten 100 Mb paths (300 milliseconds latency) directly to the CBS News control room in New York, where DNC coverage was switched live.

In New York, DNC signals were edited on an Avid NewsCutter Adrenaline system with an HD I/O card. Back in Denver, though, Leiding and others on his team sat at either the Avid NewsCutter Nitris DX or DEX systems, both supported by Avid VideoRAID five-drive storage systems working in Avid DNxHD 145 Mbps MXF to quickly turn around HD news segments for play-to-air.

"We actually had four editing systems in Denver," he said. "Two were the SD systems we've normally carried on the road, which use MPEG 50 MXF, and the other two were the new HD systems that Avid was good enough to let us use."

Leiding said the Avid Nitris gave him "unprecedented" abilities for controlling source and sequence. "We had two HD cameras shooting Katie Couric interviewing party chairman Howard Dean as they walked through the hallways under the Pepsi Center arena. The Nitris automatically sync-ed up the timecodes from each camera, so we could get the same moment from another angle on the fly."

He added, "Organization is the key to editing, in general, and the ability to cherrypick HD shots that I know will sync up is one of the best parts of the Avid system."