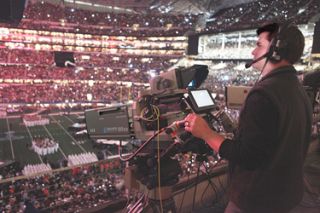 Canon has announced that its HD telephoto lenses were used exclusively in the coverage of the Super Bowl XLV event. The game was telecast by Game Creek Video and was viewed by a record 111 million persons. A total of 18 Canon XJ100x9.3B lenses were used to provide playing field coverage.

“To my knowledge this is the first time that the Super Bowl has been done where all of the large box lenses were 100-bys, so it’s a great accomplishment for our company--and for Canon as well--that these lenses are in such demand and so sought after by the production teams that we deal with,” said Pat Sullivan, Game Creek Video’s president.

Nine of Game Creek’s mobile production units were used to cover the game. In addition to the 18 tele lenses, ENG and EFP lenses were used with Game Creek’s portable HD cameras for sideline coverage.