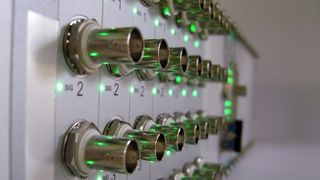 At IBC2012, Calrec will showcase Hydra2's ability to interact with third-party control and production automation equipment.

To give broadcasters a sense of Hydra2's potential as a networking solution, the demo will present a scenario akin to how it would be used in an actual production environment.

Demonstrating the Calrec Serial Protocol will be a Ross switcher emulator in conjunction with Ross Overdrive technology, which will allow for visibility into and third-party control over a number of Calrec audio console settings such as fader position, PFL and cut control for paths on faders, routing to auxes from faders, output level control for auxes, routing to mains from faders, main output level/fader control, and LB/RB input switching for paths on faders.

The SW-P-08 protocol will incorporate a variety of third-party router panels — including Evertz, Nvision, and LSB's Virtual Studio Manager (VSM) — to demonstrate remote control over input-to-output crosspoint patching. In addition to direct routing of physical inputs to outputs, it can also route to and from a console DSP via Calrec's Hydra Patchbays.