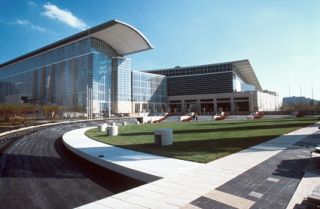 CHICAGO
Some are attending “Spring Cable Week” to see former FCC Chairman Michael Powell’s debut as president/CEO of the National Cable and Telecommunications Association, which coordinates the June 14-17 events at McCormick Place. Others will be here for the Spring Technical Forum and the new “IPv6 Summit,” the cable industry’s acknowledgement that Internet protocol plays an ever-greater role in its operations. Technology wonks will trek to the annual “CableNet” pavilion, showcasing this year more than 40 evolving technologies from “big guys” like Cisco, Samsung and Sony to nascent ventures such as ZiXI.

Michael Powell speaking at The 2010 Cable Show. The former FCC chairman returns to this year’s event as the newly appointed head of the NCTA.
Many will want to hear current FCC Chairman Julius Genachowski’s Wednesday morning message to the cable industry—and see how the response compares to that he received at recent broadcasting, wireless and electronics conventions. Still others are on the lookout for mobile and other augmentations to the core cable business. And some will come to the annual convention to see if it is still a launch pad for cable programming initiatives.

NCTA itself hopes that many of the expected 15,000 attendees (comparable to the Los Angeles crowd last year) will step into “The Park,” an amphitheater on the exhibit hall floor where vendors will tout their latest products and services in short pitches, akin to the “Speakers Corner” of Hyde Park, but with better seating.

“‘The Park’ is a concentration of what’s happening in the industry,” explains Mark Bell, vice president, industry affairs for NCTA. “The point is to shine a spotlight… that supports the notion that cable is innovative, relevant, and is enabling a whole new class of products and services that consumers value.” An advisory committee of cable companies’ chief technology officers and strategy executives selected the presentations deemed “relevant,” Bell adds. The Park’s presentations (to be unveiled just before convention time) will include a mix of about 25 “mini-keynotes,” product announcements and demos and “a surprise or two,” he hints.

Beyond The Park, the convention hall will offer wares from about 350 technology and programming vendors. Conference programs feature more than 30 sessions, including the Spring Technical Forum, the IPv6 Summit and the CIO.IT track. For the past three years, “Cable Connection–Spring” (as the aggregation of events if formally dubbed) has encompassed programs from all of the large cable industry organizations, including the Society of Cable and Telecommunications Engineers, Cable Television Laboratories (CableLabs), Cable & Telecommunications Association for Marketing and the Cable Advertising Bureau. This year, CAB’s and SCTE’s sessions are fully integrated into the NCTA agenda, while CTAM runs adjacent events.

Dan Pike, chief technology officer of GCI Cable and Chair of the Spring Technical Forum, says that the technical sessions “explore the longer term implications of what [technology] means to the industry.”

“In seven sessions with five papers each, we’ll explore the evolutionary technologies that enable individual consumption via the migration from subscription to transactional delivery, whether the channel is TV or IP,” said Pike, who has chaired or been a member of the Tech Forum committee for more than a decade. He characterizes the technical papers as an “archival body of literature” that helps future engineers understand the evolution to cable technology.

Pike points out that this year’s Tech Forum agenda includes several papers on system architecture, and that other papers go more deeply than ever into computer science, not signal science. “That’s a relatively new area of investigation,” he said. He also cites several papers on “how to transform CMTS [cable modem termination system] from data-oriented to video-oriented… to organize around streaming.” That approach recognizes the growing role of IP video streams in the cable environment. Similarly, the Tech Forum will include papers on the migration of hybrid fiber-coaxial plant into cloud architectures.

Pike expects discussions of “the cloud” will focus on how much information is stored in it and how to match architectural plans with the growing business services that cable companies provide. There is also increased attention to wireless services, reflecting audiences’ growing preferences for using any device they choose and the cable industry’s moves toward “TV Everywhere” services.

McCormick Place, Chicago, location of the 2011 Cable Show. SCTE, which co-developed the Spring Technical Forum with NCTA’s technology staff and CableLabs, also believes that the range of topics serves the needs of an increasingly IP-oriented industry.

“SCTE’s partnership with NCTA continues to grow, particularly in support of the ever-expanding role of IP in our networks and home platforms,” said Daniel Howard, senior vice president/CTO of SCTE. Howard, who is also moderating the session on Advancements in Next Generation Network Architecture at the Spring Technical Forum, says SCTE is providing IPv6 demonstrations and is “deeply involved in the Spring Technical Forum and ‘Park’ educational sessions.”

CableLabs is coordinating its annual CableNet pavilion, this year offering small displays from 41 companies, including Cisco, Harris, Irdeto NDS, Samsung, Sony and Visible World. Exhibits range from broadband content and services to set-top box technology and other customer premises equipment. CableLabs will also run its annual law/policy seminar the day before the show.

With the theme “Duality is the New Reality, CTAM’s “Insights” is “tailored to anyone who wants to delve into that critical intersection between research and marketing,” according to CTAM President/CEO Char Beales. The program features speakers from studios and networks, MSOs and research firms, who “will provide perspectives on engagement, interactivity, audience segmentation and the future of multiplatform TV,” Beales said.

Overall, the agenda maintains the traditional NCTA convention mainstays of programming operations, public policy, marketing, finance business services, according to Bell. There are also sessions about international cable operations. But he notes that this year, the group has “switched the format” slightly.

“We’re doing smaller, focused segments as general sessions, calling them ‘outlooks’ and ‘perspectives,’” Bell says. Executives from outside the media and telecom industry are being invited to offer their views on the industry, although at press time, NCTA had not yet disclosed the names of such presenters.

Many of the convention sessions, including presentations from The Park, will be streamed live at www.Live.thecableshow.com.

To register for the Cable Show, visit 2011.thecableshow.com.