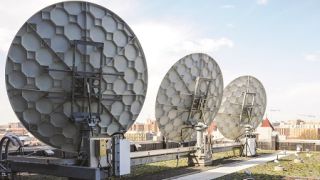 WASHINGTON—In a filing summarizing a meeting on the FCC’s C-band cost estimates and expanded use of the spectrum, media executives from a range of broadcast and cable operators highlighted key questions they have about the FCC’s current cost catalog plan, as well as the potential impact the coronavirus pandemic may have on it.

The FCC released an initial estimate of the cost of space and Earth station operators transitioning out of 300 MHz (280 MHz of spectrum plus a 20 MHz guard band) of the C-band satellite spectrum for 5G development earlier this week, and subsequently issued a call for comments.

Following a meeting held on April 28 regarding this, NCTA—The Internet and Television Association filed a summary on behalf of a group that also consisted of executives from the likes of NBCUniversal, ViacomCBS, Disney, NAB and more.

The group highlighted the importance of the FCC establishing a lump sum payment amount for Earth station operators that would take into account things like professional services, hardware and software, as well as cost impacts that may occur from supply chain disruptions because of COVID-19.

Other issues regarding reimbursement that were discussed in the meeting included timing of reimbursable costs, who is entitled to reimbursements, planning in the case of overlay licensee default, transition issues and transportable/occasional use Earth stations.

There was another issue beyond the cost catalog discussed during the meeting, like special temporary authorities for earth stations to access the 3.7-4.0 GHz spectrum being sold for live event production, including live sports.

The group argued that given tens of thousands of live sporting events are produced each year that rely on transportable/occasional use of the C-band, the FCC should establish a framework to accommodate this need, proposing a few that they say would not threaten 5G service or the C-band transition—“since any program network use of the 3.7-4.0 GHz spectrum would be on a secondary, non-interfering basis, and would be downlink only, new wireless services would not be harmed,” the group said.

PLUS: C-Band Auction Still on for December, FCC Says

Among the possibilities put forth by the group was establishing a “deemed granted” regime for STA applications that satisfy certain objective requirements, or the FCC could grant a blanket waiver on a limited basis for only secondary, non-interfering occasional use by programming networks at live sporting events for limited durations of time.

“Any of these paths would serve the public interest by ensuring that programmers can continue to produce high quality, on-location sports programming that American viewers love, without inhibiting the rollout of 5G or the transition contemplated  by the Report & Order,” the group said.

The entirety of NCTA’s comments are available online.