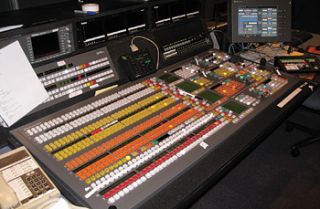 When it came time to convert our studios, we determined that all content would be produced in HD and if needed, downconverted to standard definition and lower for analog and Web distribution. Converting our primary production control room entailed the replacement of our very reliable Grass Valley 250 switcher and supporting analog devices with all new HD components. Since we were still an analog composite facility, virtually nothing in the existing control room would be kept in service after the HD conversion so we were starting with a clean slate.

At the center of the control room system is the production switcher and we began evaluating the HD capabilities of switchers very early on. What I tried to bring to the process was the long term view that whatever was selected would need to have a life expectancy of 10 years or more. The design had to be proven so that we didn’t spend the first few years of operation trying to make the switcher do the functions that we required.

I also had to be certain that the system was reliable and that support would be available over the life of the equipment. My team and I spent many hours at NAB, trade shows and visiting facilities looking at switchers and listening to the end users as we gathered information for our specifications. Once the research was completed, I had winnowed the field down to three contenders. All three systems were brought in to IPTV facilities and set up for user evaluation. Since all three systems met the performance criteria and were price competitive with each other the users’ evaluation ended up being the deciding factor. After test driving each system for a week our users selected the Grass Valley Kalypso. Now after more than a year of operation we have revisited that decision to determine how satisfied we are with the selection and to uncover any surprises, good or bad, that we have discovered.

There were a lot of pleasant surprises, although some of them it is sad to call surprises. From the pure engineering point of view, the Kalypso worked out of the box and although it had a few glitches and infantile failures, those were corrected quickly. As we have converted facilities and moved from analog systems with 15 and 20 years of reliable service to new digital systems we have found all too frequently that reliability is taking a hit. The Kalypso on the other hand has proven itself to be very reliable.

Another strong point has been the ease of use. Virtually all of our local productions are produced live to record and some events such as the presidential debates and live pledges require on-the-fly changes based on the dynamics of what is happening with the talent. The Kalypso’s control surface allows the operator complete control over the most complex capabilities of the switcher while still providing straightforward access to deal with last minute changes. All too often the need for basic control is overlooked in the push to provide flashy and complex effects. Grass Valley did a great job in providing the right combination.

One of the more clever things that we are doing with the Kalyspo is that we are using the onboard machine controls to access timelines within our Avid nonlinear editors. This allows us to jump to points within the timeline and roll that specific clip on a project that has not been outputted to the on-air server.

Not everything worked out as well as I had initially hoped. One feature that has been a little disappointing is the KlipCache, an 800 frame still store within the Kalypso. Our initial hope when purchasing this option was that it would eliminate the need for a standalone still store in the production control room. Once loaded, the KlipCache does work well but the interface to our graphics systems turned out to be so slow and limited that for many of our productions we could not rely on it, so we ended up with an external still store and load the KlipCache with more permanent stills and logos. Since the limitation wasn’t discovered until after the installation, it did make for some interesting adjustments in the control room layout as we had to accommodate an additional control panel for the still store.

Overall, I would have to say that IPTV is very satisfied with the GVG Kalypso switcher selection. The system has been reliable and met all of the needs and requirements we have and appears to be designed to last and in the digital age, products that are still performing at the ripe old age of 2 (ancient of days according to Moore’s Law) are refreshing.

Bill Hayes is director of engineering for Iowa Public TV.