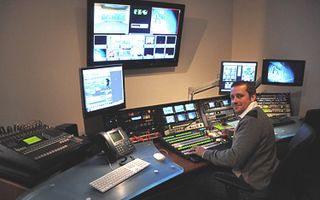 Brookline Access Television (BATV), a nonprofit organization that operates two public access channels in Brookline, Mass., has installed two Broadcast Pix Slate 5000 live production systems in its new 10,000-square-foot production facility. BATV celebrated the grand opening of its new home in late March, though it has been using the new Slate 5000s since its soft launch in January.

Peter Zawadzki, BATV executive director Peter Zawadzki at the controls of BATV's new Broadcast Pix Slate 5000. Between its two channels, BATV provides a wide range of programming, including documentaries, studio-based talk shows, and coverage of local government meetings. “Public access is a valuable asset to the community and an important First Amendment resource,” said Peter Zawadzki, BATV executive director. “We like to think our new facility is one of the most technologically advanced community multimedia centers in the country.”

A significant upgrade from BATV’s previous home, a 2,000-square-foot temporary facility with only four edit stations, the new space features two HD studios with Sony PMW-EX3 cameras and Kino Flo lighting instruments. Two identical HD control rooms are anchored by the Slate 5000 systems and Yamaha 01V96 digital audio mixers, which are controlled through the Slates. Each studio includes a robotic camera that can be controlled through the Slates as well.

BATV takes full advantage of Slate’s Fluent workflow tools, including the built-in Inscriber CG and clip and graphics stores. Several shows use virtual backgrounds, so Slate’s built-in chromakey also gets regular use. “For these shows, we often use Fluent Macros to create presets that automatically change the virtual set to correspond with the different cameras,” Zawadzki said. “In some situations, we can almost direct an entire program just using macros.”

Instead of a monitor wall, Fluent Multi-View feeds input sources to one 52-inch Sony LCD monitor in each control room. And Fluent Watch-Folders, which allows content to be sent over a TCP/IP network from edit stations to the Slate for immediate access, also gets utilized. “We don’t use it much for simple productions,” Zawadzki noted, “but it’s invaluable when we have to add graphics at the last minute, such as during election coverage.”

In an effort to avoid control rooms that look like a hodgepodge of equipment racks, the new Slate 5000 control panels are recessed into custom consoles manufactured by TBC Consoles. “In public access, particularly with volunteer crews, you can have a room full of help or a one-man operation,” said Zawadzki. “Our consoles are designed to allow one TD easy access to the equipment needed to run an entire production – but they are also roomy enough to accommodate a full crew when necessary.”

BATV also supports 45 Apple Final Cut Pro edit stations, including 16 in both of its computer learning labs, all of which are connected to a 40 TB EditShare shared storage server system. Zawadzki handled the broadcast equipment integration, while HB Communications in New Haven, Conn., provided the AV integration for the classrooms and other areas in the building.

Although its stations are broadcast in SD by its local Comcast and RCN cable systems, BATV produces its programming in HD and letterboxes its programming for air. With its Broadcast Pix systems in place, BATV is prepared if an HD opportunity becomes available on either systems. Plus, Zawadzki said BATV will launch HD video on its Web site later this year.

Beyond its new facility, BATV also maintains a Broadcast Pix Slate 3000 system at Brookline Town Hall for its coverage of meetings.