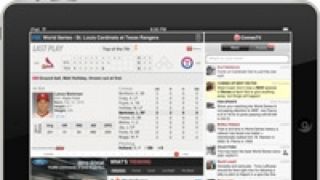 As cable providers continue to offer "TV Everywhere" strategies, using IP connections to allow subscribers to watch programming on a number of devices, broadcasters have been languishing with a static linear TV and somewhat interactive Web presence. Until now.

Ten broadcast groups (with a reach of 76 million U.S. households) have joined in a commercial partnership with ConnecTV (www.connectv.com), a Silicon Valley-based start-up, to give viewers a real-time social networking capability to interact (via an electronic tablet or computer) with other fans watching the same program. The service will also suggest related content to viewers and provide stations with promotional (both commercial and program related) opportunities that are tightly synchronized to programs being viewed.

Nine of the 10 broadcast groups had previously formed a mobile TV venture called Pearl (founded in April 2010), which will help coordinate the affiliates' participation. In addition, several of these broadcasters have made an (undisclosed) investment in ConnecTV.

For the past two years, the company said it has been developing its core technology and fine-tuning its social TV platform and user experience. Available now in an "invitation only" sneak preview, ConnecTV will be launching to the public in early 2012.

The result is an application that automatically "checks in" viewers while they watch their favorite programs and synchronizes relevant content â€” news, celebrity information, trivia, polls and play-by-play sports stats â€” onto a second (computer, iPad or cellphone) screen. ConnecTV users can see what TV shows their friends are watching, invite them to a "viewing party" and start a real-time conversation. The application also makes it easy to share viewers' favorite TV moments using Facebook, Twitter and e-mail. Real-time or time-shifted, the company said that ConnecTV will work across all television programs and on more than 250 channels.

Alan Frank, president and CEO of Post-Newsweek Stations, said, "We looked long and hard for a partner that could create a compelling environment that would encourage, enhance and monetize [social media], even during live programs including news coverage or sporting events â€” and we found it at ConnecTV.

Ian Aaron, co-founder of ConnecTV, said that with over five billion TV viewers and the explosion of tablets and smart phones globally, "we are truly at the beginning of a new way to watch TV."