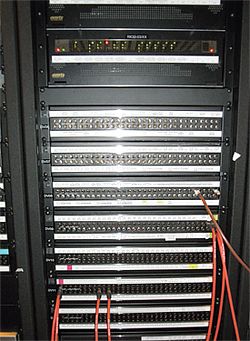 JOHNSTON, IOWA: In 1982, for my first job in television, I was hired to go to Honolulu, Hawaii as the Chief Engineer for Mauna Kea Broadcasting who at that time was the licensee of KSHO-FM and held a construction permit for a full-powered UHF television station licensed to serve the community of Kailua on Oahu. I had been working in radio for a number of years so while I was intimately familiar with AM/FM radio station hardware, other than watch TV, my only other television experience was to occasionally provide an extra pair of hands for the engineers at KMIR and KESQ when I worked in radio in Palm Springs, Calif.

Although it was an exciting and somewhat frightening challenge to move my family to an island in the middle of the Pacific Ocean and oversee the construction of a brand new TV station, I was blessed to have two consultants work with me on the project. One should be familiar to virtually all TV Technology readers, Doug Lung. The other was Bill Burnsed and some old timers may remember Bill from his company B&B Systems which made stereo phase monitoring equipment in the early days of television stereo. In the days before B&B, Bill and his wife Polly worked with me on the construction of the studios used by KSHO TV in Kailua.

When I say worked with me, what I really mean is Bill told me what to do and I did it. In some cases Bill actually had to show me what to do, like installing my first BNC connector on a piece of Belden 8281. I'd like to say that at the heart of the KSHO-TV studio was a router but that would not be correct. Instead it was a patchbay and despite suggestions to the station owner that we really should buy a router, it never happened on my watch.

One of the fundamentals that I learned from Bill was the importance of making the router, or in our case, patchbay, time zero in the plant. I spent a number of hours listening to Bill discuss the fundamentals and importance of video routing while I sat installing BNC connectors on cables. The lectures must have worked because to this day I still view the router as the heart of the plant and I still think it should be time zero. But as Bob Dylan said in 1963, "the times they are a-changin" and maybe the timing as well.

When we renovated the Iowa Public Television facility to digital we made some fundamental decisions on how the plant would be configured, based on the technologies available and how we viewed our workflow. We opted for a 100 percent uncompressed high definition video plant. We also opted to go with non-embedded AES audio. The Utah Scientific router that we installed is—as in all my previous constructions—the time zero reference point in the facility. I expect we will stay that way for quite some time for while there are other ways of doing this, the complexity of facility management still outweigh the benefits of changing to a deeper IT-based infrastructure. The core of my facility has a 10-year warranty and works extraordinarily well so we have time to watch and see what develops.

But where it is all heading does have some really intriguing potential. I recently wrote an article about the conversion of the Iowa Communications Network to video over IP and how that may impact the carriage of our signals to our nine transmitter sites ("Preparing for the IP Transition," Jan 18, 2012). As of this writing we are still looking at potential methodologies. At the same time I am also actively participating in a SMPTE ad hoc group looking at media device control over IP networks. So where am I going with this?

One of my primary reasons for being somewhat resistant to a more IT-centric infrastructure within the broadcast station environment is that the complexity and costs often outweigh the alluded to benefit. I know my IT friends will throw up their hands and tell me that I am missing a few marbles. They will talk about the commodity nature of IT hardware and software, the flexibility of IT infrastructures and on and on.

Their arguments may indeed be accurate in a broadcast network environment or in a television station in a top 10 or top 20 market where the talent pool is large and the salaries offered are enough to draw in people with the IT expertise to manage these complex and flexible networks. But from where I am, the budget can't support attracting and holding those people for too long. The budget also can't support changing out the infrastructure based on the ethereal driver of Moore's Law. But maybe there is a change in the wind that might change this.

Let's imagine that the core of the facility is now an IP network. In a packet network, the packets can be anything. In a broadcast facility the packets can be the video (compressed or uncompressed), the audio (mono, stereo, surround), graphics, metadata, control signals and so on. Now let's imagine that every piece of gear in the facility from monitors to servers and switchers to archives is plugged into the core IP router. If I look at the back of any piece of hardware in this environment I see two connections: the IEC power socket and the RJ45 Ethernet connector. OK, there might be two IEC connectors if dual power supplies are used.

But think about it! Every piece of equipment plugged into the core is turned on and identifies to the core, what it is, what it does, what it has on it, and pretty much anything and everything about it. Since these are full duplex connections that can handle anything, suddenly production switchers are control panels with a single Ethernet connection back to the core rather than to a frame with individual feeds coming from each piece of hardware. Editing systems, audio consoles and the like are all single Ethernet connections to a core router that literally routes every aspect of the devices attached and manages the interaction with the other devices attached to the core. Now there is a change that is worth making. A system limited only by the creativity of the users.

I suspect there is more than a bit of science fiction in the envisioned system but ever since I saw the first "Star Trek," I have been told that IT can do anything and I believed it... I wonder what the support service agreement on the Enterprise would be?