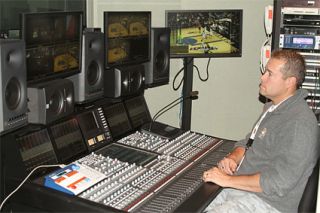 PORTLAND, ORE.—The Portland Trail Blazers basketball organization upgraded its broadcast production facilities earlier this year to handle HD picture and 5.1 audio. The work performed by the Santa Clara, Calif.- based office of Diversified Systems in the High Post Studio has provided the production staff with the tools to improve the 5.1 mix and the overall audio quality, while also adding flexibility through improvements in the network infrastructure throughout Rose Garden Arena.

According to Mike Janes, director of engineering for the Blazers, the organization not only needed to be able to create 5.1 mixes and deliver that content to its distribution—which includes Comcast SportsNet—but also interface seamlessly with remote trucks for both home and away games and, where necessary, make adjustments to the truck's 5.1 mix. "One of the things that we've encountered is that a lot of the audio that comes out of the trucks is not necessarily mixed in an ideal environment. The space in the back of most mobiles is not a very good 5.1 mixing space," he observed.

Portland Trail Blazers board operator Corey Griffin Janes did his due diligence, investigating the digital audio console options. Some vendors were offering DSP technology nearing the end of its life, he reported. "If it's an 'industry standard' that means it's going to be retired. It was important to us to not be on the bleeding edge but some place at least in current DSP thinking."

The console of choice was a 32-fader, 96-DSP SSL C100 HDS, complete with Dialogue Automix and 5.1 Upmix options, plus multiple Alpha-Link Live I/O and Alpha-Link 8-RMP remote microphone preamp units. Dialogue Automix was an attraction, he said, "But we didn't realize how big an attraction until we got it here. We have not turned off the automix since it got turned on."

The High Post Studio produces pre- and post-game programming, which includes interviews in the stadium, locker rooms, and an in-house studio, which can feature as many as six participants, a difficult mix for even the most seasoned engineer. "We've got people wearing different kinds of microphones and with different tenors of voices and the automix just handles it beautifully," Janes reported.

The Upmix functionality has also proved useful, he continued: "Just turn on Upmix and you've got a 5.1 upmix that downmixes through the desk appropriately, and doesn't take any DSP away. Without a DSP penalty I can also apply a 5.1 compressor on the stereo and the 5.1 mixes with no problem."

The video room also received an upgrade, according to Adam Salkin, engineering manager at Diversified Systems. "They had an existing Ross video switcher, which was HD capable but it needed to be rewired. We interfaced to and expanded their router, but all the other gear was new: the EVS replay system, the Chyron graphics, and the whole monitor wall."

The main focus in the audio room was the SSL. Some minor upgrades included the addition of a JBL LSR4326 5.1 monitor system with LSR2325 stereo near fields, as well as a Blu-ray Disc machine and an iPod interface. "Evidently that's becoming more common with audio operators; they have sound effects and audio on their iPods," said Salkin.

The Alpha-Link Live I/O, a 2RU box that supports 24 analog I/O and 12 AES I/O connections, and connects back to the console's Blackrock processor via MADI over fiber, proved key to the audio networking upgrades. "One of the reasons we really liked the SSL was the way they handle fiber and interfaces," Salkin revealed. "We had the Alpha-Link inside the control room, connecting to the patchbays, and we had another Alpha-Link in the equipment room to interface to the router and other devices. We then put Alpha-Links connected by fiber in remote places."

Most notably, an Alpha-Link in the truck dock, wired to a breakout panel, has improved the studio's interface capabilities with remote trucks. "Somebody can come in with a truck, plug audio into the breakout panel, and it's at the console," said Salkin.

Diversified Systems also built two mobile cases of equipment, including an Alpha-Link in each, that interface between SSL's multimode fiber operation and single mode fiber via copper, and are wired to just the fiber pins of SMPTE triax camera connectors. "It means you can plug the roadcase into any of the multiple camera connections anywhere around the stadium and connect back to the SSL console," explained Salkin.

By making use of the C100 console's crosspoint router to patch to and from those remote boxes, he continued, "You have analog audio from the truck dock to anywhere in the stadium, without running a load of fiber everywhere."

Alpha-Link has also improved audio quality in the studio, according to Janes. "When they built the studio they put some of the power feeders to the building under the floor. If you lay audio cable in the right spot you get a pretty good amount of hum. By having that running on fiber remotely the preamps have become amazingly quiet. It's not even an issue anymore."