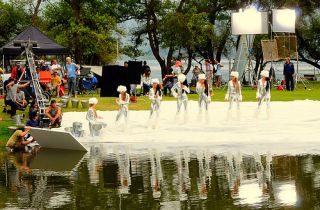 CHANTILLY, VA.: The current year is shaping up even better for TV stations than BIA/Kelsey originally predicted. The media consulting firm’s latest forecast for 2010 calls for revenues of $18.1 billion, up nearly 11 percent from 2009.

“Based on encouraging indications that advertisers are returning to local television and a stronger than expected primary election year, BIA/Kelsey... has raised its outlook for the television industry in 2010,” the firm said.

Revenues from online platforms are expected to hit $648 million this year, representing 25 percent growth over last year when they totaled $518 million. The 2009 figure represented a 12 percent increase over 2008. The firm anticipates continued double-digit growth for online and mobile platforms through 2013.

“There’s growing affirmation that local stations are seeing advertisers return,” said BIA’s vice president, Mark Fratrik Ph.D. “We see this as recognition that television is still the best method to reach large local audiences, whether the message is for a product, cause or campaign. This positive sign should help the industry invest in its infrastructure and position it for growth this decade.”

Fratrik said developments in 2010 demonstrate the television industry can sustain itself in non-presidential election years. Since 1998, non-election, even-numbered years have maintained sustainable growth rates, starting with 6.3 percent that year. Four years later and coming off a recession, 2002 posted a 10.2 percent increase, while 2006 television revenues increased by 8.5 percent.

“This year holds promising revenue increases due to the unexpected competitive primary election environment, with more than expected Senate and congressional races,” said Fratrik said. “This makes up for the economy not being as strong as we all would hope.”
-- Deborah D. McAdams

February 22, 2010: “U.S. Local Ad Revenues to Reach $145 Billion in 2014”
The projected sum represents an annual compound growth rate of 2.2 percent from last year, slowed down by sluggish growth through next year.

January 20, 2010: “BIA is Big on Local Media for 2010”
“The mix of technology, usage and advertiser trends will further define the pace and change of mobile media and affirm the core role mobile will play in the $140 billion local media industry.”

May 4, 2009: “TV Needs New Ideas to Create New Revenues”
TV industry revenues will fall below the $20 billion mark this year for the first time since 2003.

March 20, 2009: “Mobile DTV Poised for Rising Revenue Wave”
Mobile advertising revenues will hit $3.1 billion in 2013, up from $160 million last year, according to research from The Kelsey Group, a division of BIA.