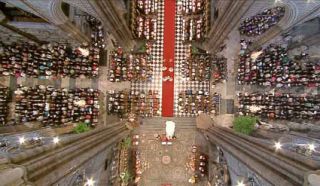 Queen Elizabeth II of Great Britain and Northern Ireland came to the throne in 1953. This was just seven years after the BBC’s 405 line television service went back on air following its World War II suspension.

The ACS sacrarium shot The Coronation caused a surge in TV set ownership and since the 50s the popularity of the medium has grown rapidly. The popularity of the Royal Family has, by contrast, suffered a gradual decline. Still, this last fact didn’t stop the wedding of Elizabeth’s grandson Prince William to Kate Middleton from being a massive TV event.

The BBC took the lead and provided/organized the bulk of the equipment and facilities for the pool coverage. These central feeds were available to all UK and international broadcasters, most of whom brought in additional gear to tailor coverage for their own style and needs.

Video facilities for international coverage within the Westminster Abbey came from NEP Visions. Audio for the international broadcast feed from the Abbey was mixed in both 5.1 and stereo using the 128-channel Stagetec Cantus digital console in SIS LIVE’s MasterSound sound mobile. The mixes were embedded with the outgoing video signals.

As evocative as the music and the vows were, pictures are even more important in a broadcast like this. Viewers now expect full coverage, which is where special cameras come in. Aerial Camera Systems (ACS) supplied 16 of the 23 camera positions inside the Abbey for the BBC’s pool coverage.

Equipment for this location included 12 channels of Sony P1s and four Ikegami HDL51s, plus ACS’s SMARThead remote tilt and pan system. Two remote heads were fitted with 40 X lenses. ASC also installed a camera high above the Sacrarium overlooking the aisle and altar, which was for the first time seen in HDTV.

Another new angle showed the bells of the Abbey ringing out at the end of the service. Fourteen cameras inside the Abbey were mounted on brackets specially designed and built by SIS LIVE. Outside, ACS had a HD Cineflex V14 on a stabilized mount, for aerial shots of the crowd and the balcony at Buckingham Palace.

Coverage for UK commercial broadcaster ITV was produced through news provider ITN. While ITV took the main pool feed for the wedding service, ITN organized 60 cameras along the route. It also had some additional positions in the Abbey, a few of which were shared with the BBC and Sky.

The exterior of the PacTV site The majority of facilities for ITN were provided by OB company Prolink Television. These included its new HD OB truck positioned at Canada Gate not far from Buckingham Palace. A second vehicle was located at the Abbey.

BSkyB had originally wanted to achieve a Royal first by covering the entire wedding in 3D. Permission to shoot 3D inside the Abbey was refused but Sky had four rigs with ARRI ALEXA cameras, supplied by Axis Films (OnSight), outside the Abbey and at Buckingham Palace and Canada Gate. This stereoscopic material was used for a highlights program shown on the Tuesday after the wedding.

“We were desperate to get some 3D involvement in an event as important as this,” said Darren Long, Director of Operations at Sky Sports who oversees OBs. “Although we didn’t get permission to film inside the Abbey purely because of space constraints, we did get permission from Clarence House to at least capture some of the pageantry from a spectator’s point of view.”

PacTV’s London studio Most of the UK’s major OB companies had units out for the big day, including CTV and Telegenic. One OB unit was stationed in London, providing roving cameras and live feeds. Another provided similar coverage from St Andrews University in Fife, Scotland, where William and Kate first met as students.

Eight SNG trucks, three flyaway packages, and a TVRO receive-only dish were positioned at sites around London. They included the Abbey, Buckingham Palace, and the Goring Hotel, which is where the first views of Kate’s wedding dress came through pool feeds. Arqiva also laid on seven trans-Atlantic fiber circuits.

Arena Television supplied both scanners and helicopters. On the ground were the company’s OB12 and the new OB14, which went into operation at the end of March. This single expanding articulated truck is the first scanner in the UK to house a Lawo audio console. The two trucks covered the Horse Guards Parade end of the Mall through to Parliament Square. In the air, Arena Aviation provided two helicopters equipped with Robinson HD packages shooting footage for the news pool.

The Royal Wedding was the biggest event so far for the London office of LA-based transmission/production company Pacific Television Center (PacT V ). HD and SD signals were losslessly compressed in the JPEG2000 format for distribution to Canada, Australia, New Zealand, Japan, and the US. Canadian station Global TV rented a 45Mb connection to multiplex feeds from a three camera studio outside Buckingham Palace.

Graphics for many broadcasters were produced by specialist company MOOV using the Chyron Hyper X3 platform. Associated Press Television News (APTN) claimed to be the first news agency with live HD footage of the event, which was distributed to over 700 TV stations. Ten hours of coverage was made available to news channels through a satellite network leased for the occasion.

Graphics for many broadcasters on the day – including the BBC, ESPN, RTE, ITV, Channel 4, and Sky Italia – were produced by specialist company MOOV using the Chyron Hyper X3 platform. One system was installed at the studio farm outside Buckingham Palace, with another in a temporary facility near the Abbey.

The graphics package was used to put information on screen about the wedding guests and the locations involved in the Wedding. Animated maps were also created to show the route taken by the bride to tie the knot.

The whole production was substantially bigger and more technically advanced than when William’s parents, Prince Charles and the late Diana, Princess of Wales, married in 1981. But it fell short in terms of viewer numbers. Back then the UK audience was 28.4 million, compared to 26.2m this time. Still, the broadcasters probably concluded that pulling in 26.2 million viewers was well worth the effort.