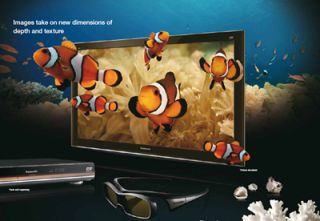 Panasonic is ramping up its realm of 3D hardware in Australia right now with a trio of 3D product offerings: plasma HD television, Blu-ray disc player, and special eyewear.

The maker said it's planning to begin shipping its four new models of its "Neo Plasma" 1080p 3D televisions — along with a 3D Blu-ray disc player and 3D shutter glass eyewear to Australian retailers in June.

And so much for plasma HD sets being on their death beds at the hands of LCD technology. According to Panasonic's 3D statement in Australia, "As a young technology, plasma continues to be best placed to take advantage of 3D TV."

Panasonic said it has developed faster screen phosphors--and these, coupled with a 600Hz sub-field drive—provide the 3D images with synchronized alternate- imaging for left and right eyes. The Viera HD 3D models, with a contrast ratio of 5,000,000:1, also deploy new filters designed to minimize glare and reflection from external light sources.