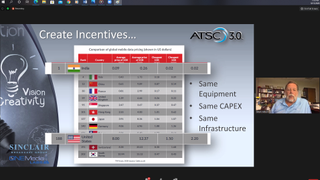 HUNT VALLEY, Md.—The television industry, which has walked the same technical path for the past 20 years with its OTA delivery of DTV, is on the cusp of a new era of innovation in fields as far flung as the delivery of wireless data to cars and premium video to homes as ATSC 3.0 is rolled out and broadcasters embrace new business opportunities.

The ATSC president assured attendees that the ATSC 3.0 standard will allow broadcasters to innovate without giving up their bread-and-butter business.

“There’s a lot of headroom for innovation in the standard as it is today. ATSC [3.0] allows broadcasters to grow and change without abandoning existing views and businesses, and there are many technical design decisions within the standard that make this possible,” she said.

The standard was built to accommodate new technology that will drive future innovation without disrupting service to viewers or obsoleting their NextGen TV sets, she said. Having a bootstrap that tells receivers what to expect is key.

“If you tell the receiver every time it tunes in, ‘This is a 6 MHz band, and here's where you find everything,’ then the receiver can be flexible,” she explained. “[I]t can change as you want to change what's happening under the hood in standard.”

The bootstrap also tells the receiver when the next physical air frame of video is coming, which Noland described as “one of the most fun parts about it.”

“What that allows you to do is… to have some kind of who-knows-what frame coming through with all kinds of crazy stuff that might be happening in the future,” she said. The receiver simply relies on data in the bootstrap to understand when to look for the next 3.0 frame that it can understand and decode and simply skip the “crazy stuff” it can’t understand.

“You have to ask yourself, ‘Why is it in India, for example, using the same equipment, the same CapEx structure, same general infrastructure… that I pay one price for a gigabyte of data delivered… and I look at the United States and mysteriously in terms of the lowest cost bit, we’re looking at a 100:1  difference,” said Aitken.

Innovation here for broadcasters promises “a huge income potential,” he said. “So do [I] reach for the sky and say, ‘Well, I’m going to get 1 cent per gigabyte delivered’… [if so] you’re looking at $200 million in one market,” he said, adding that his figures are a target and “certainly something to aspire to.”

One possible client looking to deliver massive amounts of wireless data is the automotive industry. “I hadn’t really heard too much about ATSC 3.0 until recently,” said Ayres, who has been in the automotive industry for 30 years and connected cars for the past 10. “But the more I learn about ATSC 3.0, the more excited I am about the potential with connected vehicles.”

Most cars shipped today in the United States are connected, and guided navigation, infotainment and diagnostics are major data-driven applications available in many, he said.

“You know, the cost of sending that data to those vehicles, I think [that is] what's exciting to me around ATSC 3…. [It’s a] very low-cost way to continuously update those vehicles,” he said.

Ayers pointed to the delivery of map data to vehicles for ATSC 3.0. “There's lots of information [to send] over a wireless connection that can cost a lot of money,” he said. “What carmakers are trying to do is have dynamic map data so that it's constantly updated. You can constantly push the latest version to the vehicles [via ATSC 3.0],” he said.

ATSC 3.0 as an IP-based platform gives broadcasters the ability to combine their core linear live content with the internet. “That brings with it a lot of opportunities for innovation around the delivery of both internet-based and linear content,” said Schelle.

Unique characteristics of ATSC 3.0 that support personalized audio and interactivity give broadcasters a way to innovate by offering personalized content, interactive advertising and even support for sports betting, she said.

“[B]roadcasters can customize, they can create… things that they haven't been able to do before in terms of enabling their content to be personalized,” she said. “You know, as I think about the application environment, it’s really giving us control. It is enabling… taking what we’re already doing with OTT and other services and creating environments that all us to direct the consumers’ journey.”

Silicondust is building its business of ATSC 3.0 innovation, having raised $600,000 with a Kickstarter campaign earlier this year to develop and market a home gateway with up to ATSC 1.0 and ATSC 3.0 receivers.

“Dropping a gateway is more screens and more screens that have ATSC 3. That means faster adoption; that means more eyeballs. … So, for entrepreneurs that also means that enables integration between the broadcast TV world and the app-driven world,” said Kelsey.

A VOD if the webinar is available online.