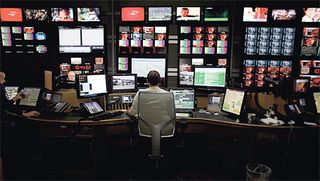 AP completed the transition to HD ahead of the 2012 London Olympics in July and the U.S presidential election in November. AP says it’s the largest rollout of HD by any news agency globally, and is part of part of the news organization’s multimillion-dollar investment to transform its entire video business to meet the growing demand for video news from broadcast and online customers.

AP began with entertainment news in November 2011, followed by sports news via its joint venture with Sports News Television (SNTV) in January 2012. AP broadcast and digital customers now have the choice of receiving video content in either HD or SD (Standard Definition).

The transition involved a series of upgrades, including the introduction of more than 200 HD cameras, upgraded mobile satellite trucks and enhanced backhaul capabilities to handle the HD signal. In addition, video news bureaus around the globe have been upgraded to the latest generation of video editing, compression and transmission technologies, and state-of-the-art HD Master Control Rooms (MCR), which have been constructed in more than 20 locations, including London, New York and Washington. AP’s production systems in New York and Washington have been upgraded for HD production. In London, AP has installed a new production system allowing journalists to edit HD content at their desktops

“This upgrade to HD is not just about supercharging our equipment and technology infrastructure. It has the needs of the customer at its heart and the quality of AP journalism coursing through its veins,” said Sandy MacIntyre, AP vice president and director of international video news. “AP has completely transformed its video business from camera to customer. As well as working with new cameras and cutting-edge editing and transmission software, we now have more video journalists providing regionally relevant content from more places than ever before.”

MacIntyre added that AP’s new video infrastructure in newsgathering, production and distribution will benefit all customers, even those who choose to continue receiving content in SD.

“The HD launch is a major milestone for AP in an 18-month transformation of our video business. Our customers expect us to be responsive to the way the news world is changing, which means reacting to the increase in demand for video news, providing it in better quality, and making it available on more devices,” said AP Senior Vice President Daisy Veerasingham, who heads the video business internationally. “In the case of HD, we have invested ahead of the market need, making it easier for broadcasters and digital publishers around the world to make the move to HD. Not only are we now fully HD for customers, but we can deliver our content on more platforms than ever before.”

As part of the continuing commitment to improving its video services, AP announced the beta launch of AP Video Hub, catering to the increased demand for breaking news from digital publishers and news-centric websites.