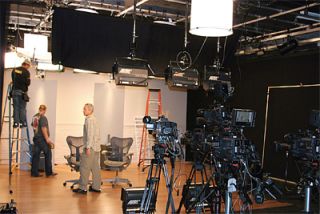 NEW YORK—AOL's manager of studio operations, Joe Adams, was under the gun last year to upgrade the company's New York and Beverly Hills studios to HD by year-end. He complied admirably.

Mandate number one was to get a high quality, uniform look. Other considerations included flexibility, speed, cost, storage, physical space and backup. Adams also intended to choose equipment that "we knew would work together right out of the box."

AOL worked with Digital Factory Inc. and Keycode Media to build its new HD studio. But AOL had an edge over typical broadcast studios: the ATSC standard display rate of 30 frames per second wasn't mandatory.

"We don't have to stick with 720 or 1080i—ultimately everything we do gets compressed and put on the Internet," said Adams. "Being able to shoot in 24 frames per second was easier—[that] decision drove a lot of the engineering."

The format also saves space, a particularly useful factor for AOL, where so much content is moved back and forth between the two studios. But the decision proved somewhat tricky as most systems in the broadcast world rely on switchers, converters character generators and other pieces of equipment that run at 30 frames per second.

Both begin with Panasonic's AJ-HPX2700 VariCam camcorder, which offers variable frame rates as well as the option to output directly to a digital path through multiple system interfaces or to 64 GB P2 cards. What's more, said Adams, "They had a fantastic [purchase] deal going on at that time."

Under the tapeless scenario, the 23.98 frames per second signal flows directly from the back of the VariCam to a Harris Platinum router to Telestream's Pipeline Dual HD, which transcodes it to Apple's ProRes video format as the media is being captured before delivering it to the storage area network.

TJ Ryan, Digital Factory's lead engineer on the project, said the tapeless digital workflow is both time and cost effective.

"A computer interface controls all five Pipelines (10 inputs)—everything starts recording directly to the SAN and the editor starts editing," said Ryan. "And you don't have to buy $190,000 HDCAM decks—you can buy a Pipeline for $10,000—five of them for $50,000, [versus easily $1 million for the traditional process when factoring in labor costs].

However, an uncompressed HD signal was needed to get a high quality master. So video is simultaneously recorded onto the VariCam's P2 cards, which are walked over to the studio's post production hub. There the recording is ingested and written to LTO4 tape using Cache-A archive appliances, said Adams.

Ryan noted that the Harris Platinum router streamlines the process by enabling him to reconfigure connections at the studio or remotely via WebEx.

In addition, the router's built-in multiviewer increases throughput efficiency and cuts down on equipment buys (notably distribution amplifiers) and installation.

"It eliminates all these frames and all these DAs, so there's less cabling," said Ryan. "It's just a nice, clean install that's easy to operate and gives you unlimited options."

Black Magic's Broadcast Videohub Router is used in post-production, where it's available as a soft panel on each of the editors' computers. Kudos were given to its affordable price and overall cost effectiveness (a separate box as a router controller is not required), touchscreen monitor, and web interface that lets users access it with an iPad or iPhone.

"They can take that into the field—shoot in the field and have ProRes 422 content on their pipeline that they can e-mail back to the SAN, ready to go," he said.

Adams also noted that the studios have done a lot to build around the music videos that contribute substantially to the brand. This agenda dictated the purchase of the Euphonix System 5 board, surround sound production and monitoring equipment, and Martin Entour 250 lights.

Integration and procurement of all the equipment was provided by Studio City, Calif.-based Keycode Media.