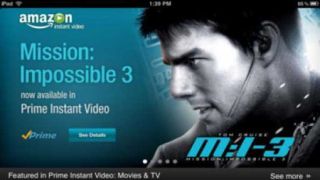 In yet another example of new competition for traditional television broadcasters, Amazon last week introduced a long-awaited app that allows users of Apple’s iPad to stream or download movies and TV shows from their Amazon Prime libraries.

Amazon’s move creates a major new media option for movie purchases, rentals and television shows to Apple’s popular tablet. At least for now, Amazon has no application for Android tablets, with the exception of the company’s own Kindle Fire device.

The free app, downloadable from the iTunes App Store, can play back all 120,000 titles in Amazon’s video library of movies and television shows, both for rent and purchase. Amazon Prime members can also use their membership to watch thousands of videos at no additional charge.

Amazon Prime began as a two-day shipping service priced at $79 per year. Video streaming was added to the service as an enhancement. Amazon’s Whispersync technology, like its electronic book technology, allows viewers to resume viewing content across other devices that support the video service.

Amazon’s move marks the second time this summer that the online retailer has expanded its media content support for Apple’s iOS platform. In June, Amazon launched its Cloud Player, which brings local and streaming support for Amazon music and readies competition with Apple’s iTunes Match service.

Also, Amazon just unveiled a licensing deal with Warner Bros. to boost the number of titles in its Instant Video library, following similar deals with MGM and Paramount.

According to a report by “The Verge,” the new system has a few kinks. New video purchases have to be made on Amazon.com, instead of directly from the app. The report also said the new app is not compatible with Apple TV and AirPlay compatibility is limited to sound only, with video only available on the iPad.