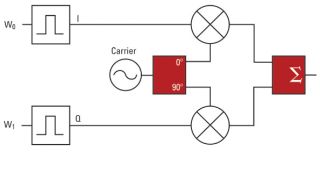 The distribution of content involves the need to adapt digital information to its means of carriage — what we typically call transmission — and to understand that fully, we need to understand the process of digital modulation.

Content distribution and transmission are implemented differently on wireless, wired and physical media, where each one uses modulation schemes tailored to carry content most efficiently and robustly. Wireless transmission includes terrestrial, satellite and wireless LAN channels, with VSB and OFDM serving the first, phase shift keying (PSK) for the second and OFDM again for the third. Wired transmission to the home is mostly by coaxial cable, using quadrature amplitude modulation (QAM), or by twisted pair, using OFDM over DSL. Physical media, i.e., DVD or Blu-ray, use an optical channel coding called eight-to-fourteen modulation (EFM).

One of the simplest digital modulation schemes, QAM, takes two subsets of each binary word and applies the magnitude of each subword “value” to one leg of a multiplier (modulator), where the two multipliers are 90 degrees out of phase. (See Figure 1.)

For example, a 4-bit word is split into two 2-bit words, each having a decimal value of 0, 1, 2 or 3. These values are then offset by the average (1.5 in this case, when the values are evenly distributed), resulting in a symbol input to the multiplier of -1.5, -0.5, 0.5 or 1.5, depending on the corresponding 2-bit word. By making the new average zero, there is no DC component to the symbol stream, and thus the output signal spectrum will have no power at the carrier, i.e., it is a suppressed carrier signal. On the receiving end, the digital demodulator can recover the carrier by one of various nonlinear means.

Because a “hard” transition between words would cause a large amount of redundant sideband energy, the input streams to the multiplier are sent through a raised-cosine filter that “smooths” the edges and results in a tight signal spectrum. Our 4-bit example results in a 16-QAM signal “constellation” of 16 symbols (16 = 24), forming a 16-point grid when viewed on a modulation analyzer. Typical digital transmission systems use a 16-QAM, 32-QAM or 64-QAM constellation, depending on the required transmission bit rate and the desired C/N at a serviced receiver.

VSB is a special case of amplitude modulation, wherein the output signal is filtered with a special form of high-pass filter (vestigial sideband or Nyquist) that attenuates one of the modulation sidebands. The absence of part of one of the sidebands necessitates the reinsertion of the carrier (or pilot) signal at a lowered level.

PSK is another modulation scheme that maps information symbols onto a transmitted carrier signal. With this scheme, however, the symbols are distributed onto a constellation that forms a circle, i.e., the amplitude is always constant, but the phase of the carrier is modulated by the symbols. While a 16-PSK transmission, with 4 bits per symbol, would be mapped onto one of 16 possible phases, it can be seen that a 4-PSK system (commonly called QPSK) is identical to a 4-QAM system. Having a constant amplitude is a benefit in systems with large linear distortion, such as that encountered on satellite links.

OFDM is a complex form of modulation that combines QAM and frequency-division multiplexing (FDM), the latter being the method by which different signals can simultaneously occupy a frequency band by using separate carriers at different frequencies.

An OFDM modulator first converts a single high-data-rate stream into multiple lower-rate streams. These parallel streams are then modulated onto orthogonal carriers that minimize the mutual interference that the data symbols could create during impaired channel conditions. This modulation is carried out through a combination of multiple QAM modulators followed by an inverse fast Fourier transform (FFT) that maps the individual streams onto a broadband signal. The resultant signal is then amplitude modulated onto the final RF carrier. OFDM, due to its strong performance in a heavy interference environment, is an integral part of the 802.11 standards used for Wi-Fi and now WiMAX.

In any of these systems, there is always a trade-off between bit rate and desired error-free performance, and these are set by two limits: Nyquist and Shannon. Nyquist sets the channel bandwidth needed to carry a train of symbols, and Shannon sets the C/N level that is needed for error-correctable performance. To understand this at the conceptual level, imagine a system that maps input data onto two amplitude states (i.e., two symbols). Increasing the data rate, according to Nyquist, requires increasing the channel bandwidth to allow for carrying the information without inter-symbol interference.

But if we take the same input data and map it onto four possible amplitude states, we now need only half of the channel bandwidth compared to the two-state system, for the same data rate. It would seem as though we got “free” channel capacity. But Shannon tells us that, given the same transmitter power, the need for twice the number of possible states means that the signal has now lost signal-to-noise power, since the distance between adjacent symbols is now half of the original distance.

Thus, Nyquist and Shannon together set the spectral efficiency of a system, which we can measure in bits per second of data per Hertz of channel bandwidth, commonly described as “(bits/s)/Hz” (or erroneously as bits/Hz). Thus, a modulation system with a “raw” data rate of 32Mb/s over a 6MHz wide channel results in a spectral efficiency of 5.3(bit/s)/Hz. In practice, the net bit rate efficiency will be lower, due to FEC and other overhead.

Because passband filters cannot have an infinite cutoff, spectral efficiency also depends on the band-edge roll-off, which varies among systems. The net bit-rate efficiency of various modulation systems in use today ranges from about 3.23(bit/s)/Hz for ATSC to about 6.65(bit/s)/Hz for DVB-T2. (These numbers, however, should not be directly compared, as they represent different values of C/N threshold.)

New technologies on the horizon

It’s conceivable that a digital distribution system that exceeds 10(bit/s)/Hz of efficiency is nearing our grasp, considering the current development of various promising technologies. Multiple-input multiple-output (MIMO) is one such solution, which uses multiple antennas and front ends to resolve reliability issues while maintaining or improving bandwidth efficiency. Combined with a video compression system such as High Efficiency Video Coding (HEVC), a new broadcast system could support more than 20 channels of high-quality audio and video within a 6MHz or 8MHz RF channel.

Executives from television broadcast organizations around the world have already formed the global Future of Broadcast Television (FOBTV) Initiative, establishing a framework for cooperation to chart the future course of terrestrial television broadcasting. DVB and ATSC are among the groups working to develop and specify new compression and channel coding technologies that are expected to increase the data throughput and functionality of digital television broadcast. The sky’s the limit!

—Aldo Cugnini is a consultant in the digital television industry and a partner in a mobile services company.