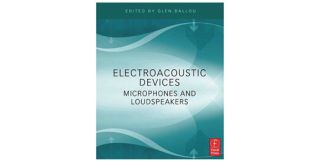 As late summer turns to fall here in New York, thoughts turn to apple picking, fall foliage, and… back to school. Since it is that traditional time of the year to hit the books, why not some audio books? This summer I’ve been revisiting the classics—some of my favorite audio references, but in their latest editions.

To keep from getting too overloaded this early in the new semester, I’ve settled on three to talk about here, and decided to focus on microphones, generally the first device in an audio signal chain.

The three books are: “Sound System Engineering,” Third Edition, by Don Davis and Eugene Patronis Jr.; “Eargle’s Microphone Book,” by Ray A. Rayburn; and “Electroacoustic Devices: Microphones and Loudspeakers,” edited by Glen Ballou. All three are published by Focal Press.

A CLASSIC
The previous editions of “Sound System Engineering” were written by Don and Carolyn Davis, the founders of Synergetic Audio Concepts (Syn-Aud-Con) audio education company, and have served as a primary reference for audio systems design.

Focusing mainly on sound reinforcement, the principles presented in the book are applicable to all kinds of audio systems including those for broadcast, post production, and studio recording.

The third edition of this classic provides a new dimension to the material with the addition of co-author Dr. Patronis, professor of physics, emeritus, Georgia Institute of Technology.

Each chapter identifies which of the authors was responsible for its content, and the reader gets the best of both worlds—a field approach with the steps and basic formulas for designing a system with enough gain, coverage and intelligibility; and a more academic approach with further exploration of systems and concepts with more rigorous math that might be new to some and perhaps a review for others (flashbacks to engineering classes past).

I almost hesitate to use the word academic, as it might connote an image of an ivory tower scholar, set apart from the practical world. Not the case with Dr. Patronis who has extensive knowledge of both theory and practice.

Having had the good fortune of attending many Syn- Aud-Con workshops where Dr. Patronis taught, I can say he has an engaging teaching style, and the wonderful ability to make higher math accessible, describing what a formula is telling us and applying it in real-world situations such as microphone or loudspeaker design or signal processing. This comes through in his writing as well.

No matter how hard one tries, you can’t get away from the math. As the authors say in chapter one, “Mathematics for Audio Systems,” “a knowledge of mathematics and physics is essential to a realistic understanding of audio engineering.”

I would suggest readers study this chapter as well as the second, “Using the Decibel,” before moving on to, not only the rest of this book, but other engineering books, audio and otherwise.

Chapter one starts with simple numbers and moves on to mathematical operations, complex numbers, trigonometry, logarithms and phasor math. It includes formulas with explanations, completed examples and useful charts.

Other chapters cover such topics as interfacing electrical and acoustic systems; the acoustic environment including small and large room acoustics; audio and acoustic measurements; designing for acoustic gain and speech intelligibility; microphones; loudspeakers; signal processing including delay and equalization; and an appendix on good wiring practices.

But, here we’ll concentrate on microphones, and before returning to “Sound System Engineering,” let’s take a look at the other two books on my list.

‘AUDIO CYCLOPEDIA’
“Electroacoustic Devices” is excerpted from the “Handbook for Sound Engineers,” Fourth Edition, edited by Glen Ballou. (Before Ballou took over the editorship, this used to be known as the “Audio Cyclopedia” by Howard Tremaine.)

The microphone section, written by Ballou, Joe Ciaudelli and Volker Schmitt, is a good place to start for someone fairly new to the topic.

The mathematical formulas are kept to a minimum. Well-written descriptions predominate of the different types of microphones as classified by polar patterns, sensitivity, frequency response or construction (carbon, crystal, dynamic, condenser, elected) and are supplemented by graphs, photographs and illustrations of the microphones or technologies being described.

Special use mics, such as PZM, lavalier and lapel, head-worn and parabolic are also described, as are mic accessories such as windscreens, shock mounts and attenuators.

Stereo mics and stereo micing techniques and mics for binaural and surround recording are included. Some common microphone setups are described with pros and cons for different instruments.

Also included is a good tutorial on multichannel wireless microphone and monitoring systems by Ciaudelli and Schmitt.

This book covers similar topics as the previous one, but is more in-depth with more of the math behind the designs. The book is very readable with clear descriptions, and heavily illustrated with photos, cutaway images of the mics, diagrams, equivalent circuits, charts and graphs. Also included are sections on microphones for broadcast and communications, speech and music reinforcement and microphone arrays.

The sections on stereo and surround microphone techniques and practices include a discussion of how sound emanates from different instruments and presents case studies of actual recordings; why certain mics and placements were chosen; and illustrations showing the setups.

The classical stereo recording and the surround recording case studies sections include discographies of the projects described. The interested reader can track down the CDs and hear the results of the choices made during the recording sessions.

Now back to “Sound System Engineering.” Microphone usage appears throughout the various system design chapters by Davis, with Dr. Patronis penning the dedicated chapter on microphones.

Of the three books mentioned here, the microphone section of this one has the most mathematical treatments of microphone characteristics, with the text giving clear explanations. This chapter includes detailed discussions of thermal noise, and of the nature of response and directional characteristics. (Here’s one of the places where that phasor math comes in handy.) Boundary microphones also get a detailed write-up.

For a study of microphones, these three books complement each other nicely. Where one may have a short section on a topic, the other will go into greater detail. All three provide historical background and give credit to the early innovators and inventors on whose shoulders current engineers stand. “Eargle’s Microphone Book” even dedicates the final chapter to classic microphones and their development.

So crack open these books. There’s more to discover.