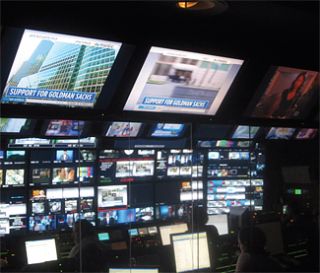 LOS ANGELES
Stereoscopic production was the attention grabber at this year’s NAB Show, and companies providing tools to generate appropriate graphics for this format made their own splash.

“It remains to be seen how soon [stereoscopic] 3D will gain traction in the newsroom,” said Weather Central Senior Vice President Steve Smedberg. But, he noted, “It is important that our customers know that Weather Central systems deployed today will provide the performance and capability needed to take on tomorrow’s requirements.”

The consensus acknowledged that the new stereoscopic capabilities demanded by big networks and large play-out facilities for sports, movies and other primetime fare would not be a big draw to newsrooms. Even if viewers were willing to put on 3D glasses for their news updates, the planning required for stereoscopic production would tend to run counter to the on-the-fly coverage of news events. Yet common wisdom is often challenged by a powerful enough lure.

“There’s one network that does have a news interest,” said Shaun Dail, vice president of sales and marketing for Orad North America, who declined to identify the network.

Most newsrooms are looking for affordable tools for workflow efficiency and flexible display.

Orad’s Maestro turnkey HD/SD 3D character generator is designed to deliver enterprise graphics in real time, according to Dail. Upgrades to the solution were shown privately to key customers to preview the debut of its 6.0 version scheduled for IBC in September. MSNBC has used Maestro since last July.

“Some groups have asked us to work with other graphics systems that they already have in place for their branding engine,” said Weather Central’s Smedberg. “We’re providing an XML data feed to Pixel Power and also some graphics. Together we’ve worked on some control protocols so that Pixel Power can run the alerts and warnings on their LogoVision and BrandMaster products.”

Although the two companies have been working closely on integrating the two products, each was being sold independently at press time. Smedberg predicted that Version 2 would be available later this year.

Compix Media’s CompactCG is a 1RU, 17-pound box capable of running all of the software and features supported in all of their other products, according to Lan Merrill, the company’s vice president of engineering. The purpose-built unit, targeted for vans, fly-packs and rental houses also has an active mechanical bypass relay to further ensure signal transmission.

Harris’ IP version of its Channel One automated channel system was designed to address a major change in the broadcast industry, according to Brian App, senior business development manager of the company’s Broadcast and Communications division.

“IP frees up SDI limits while reducing the amount of equipment needed,” said App. Acting as a graphics engine and transcoder, it can automatically tailor content to platform and ad opportunities and deliver it to multiple media outlets (phone, Internet, digital subchannels), he said.

“It’s a turnkey solution of four channels of graphics,” said Phil Carmichael, director of marketing. The ready-to-go (from packaging to rack) solution has single point play-out control, and includes a web-based rundown solution.

Egyptian state broadcaster Egyptian Radio and Television Union, the country’s state broadcaster, which broadcasts some 35 channels, uses the Vertigo Xmedia Suite graphics automation system for its new headquarters, in part so it could control its own graphics, which ERTU had previously been outsourcing.

“We’ve cut our graphics out-sourcing completely,” said Dina Abdel Salam, Chief Editor at ERTU’s News Department. “Prior to the new system, it used to take a huge amount of man hours to get a new graphic on-screen—from ordering, to designing, to uploading. Now, it just takes seconds.”