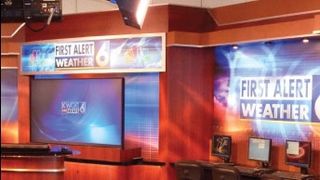 In August 2010, independent station group Young Broadcasting decided to undertake an end-to-end HD news production upgrade, from the field equipment all the way to the production systems. This included the installation of Grass Valley HD digital news production technology at KWQC, its NBC affiliate in Davenport, IA, to help the station migrate to local HD news operations. The upgrade was done with the idea that the shared-storage system would improve efficiencies and get more news content to air faster.

Now that that system has been on the air for more than a year, station personnel there now collaborate more effectively, and stories get to air faster than ever — often beating the local competition. In fact, the news experiment has gone so well that the Young Broadcasting station group now has decided to upgrade the news departments of eight of its 10 stations to Grass Valley's networked, file-based, HD news production and distribution system.

The stations involved will use the EDIUS NLEs to cut daily news packages while the Aurora Playout software, in tandem with the K2 Summit servers, will enable the stations' staff to automatically schedule their newscast rundowns while still retaining the ability to insert breaking news segments, or go live from the scene, at the last minute.