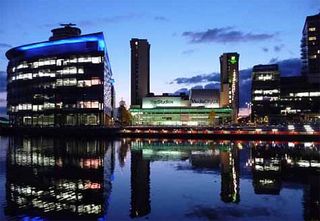 Broadcasters have been contemplating the next-generation broadcast centre for more than a decade. Now that we are well into a new millennium, these facilities have begun to appear. Yet in many respects -- regardless of modern infrastructure demands like 3G and sophisticated networking -- a TV studio of 2012 is more likely to follow the traditional template for lay-out and equipment than to be some futuristic virtual space.

The galleries in The Studios block at MediaCityUK (MCUK) are recognizably conventional. This is partly because the BBC was always going to be a primary user of this commercial facility. ITV and BSkyB, in addition to independent production companies, are target clients as well. So the facilities were designed to be general purpose in the sense that any freelance staff walking in would recognize how everything works.

The control areas for each studio are positioned above their respective space, with a separate room for vision and production and another for sound. (There will be full details of the audio galleries in a forthcoming report about MCUK, concentrating on the sound installations.) The vision, lighting and sound control systems were part of the BIGSYS element of the MCUK installation undertaken by integration company TSL. The other aspects were the studio floors, central technical area (CTA), routing, terminal equipment, reference systems, servers, editing and media.

The main studios at MCUK are operated on behalf of Peel Media, a subsidiary of development company Peel Holdings, by MediaCity Studios Limited (MCSL). This is a joint venture between Peel and Satellite Information Services (SIS), the horse racing TV programming and uplink facilities specialist that has its own facilities at MCUK.

The studios' infrastructure is 3G-SDI, which allows for both 1080p/50 and stereoscopic 3D. This move was taken to make MCUK as future-proof as possible.

Taking HQ2 as a typical example, signals from the cameras on the studio floor are fed into a camera patch system, which in turn is connected to the core wall box patch facilities. After passing through the camera base station, the video from the floor arrive at the Sony MVS-8000G vision mixer.

Julian Boden, director of engineering for MCSL, explains that the MVS-8000Gs are dual link capable versions; allowing them to run in 3G dual link format or 3D. "To run as 3G single link the crates [processors] would have to be changed," he says. "We do have a fully 3G infrastructure; including all the routing, the glue and the embedding and de-embedding. But at the moment, the crates for the vision mixer are not full 3G, although as far as we know, the BBC does not have any plans for 3G yet."

Different screens are used for vision monitoring, depending upon the different jobs involved in the production process. The multiviewers on the main wall are Miranda units, with a Sharp big screen as the central monitor. The engineering screens are from TVLogic, while Barco monitors are used for Grade I grading work.

With broadcast installations in general now heavily influenced by IT, it is no surprise to find what Julian Knight, TSL's chief technology officer, describes as "a lot" of Dell screens. These are used for both computers and TV work. Knight explains they can be converted for video by using an adapter.

Monitoring feeds are taken from a video matrix connected to the vision mixer. The signals go into the multiviewer and are then passed on to the big screen monitor. Desk monitors are fed directly from the matrix.

The monitor stacks have been "turned upside down" to meet BBC operational preferences, says Boden. He explains that, in traditional galleries, the camera previews are at the bottom of the stack. But the production staff asked for these to be moved up along with the programme feed, while the bottom row now contains the key sources.

Studio lighting is controlled in the vision gallery using an ETC Congo panel.

BBC Sport was one of the key departments that moved from London to Salford. It has production offices and on-air facilities at Quay House, which is diagonally opposite the Studios building.

This space is shared with sports and news station BBC Radio 5 Live. Although Radio 5 Live has its own reporters, commentators and production chain, the station does take audio clips of interviews done for BBC TV's Saturday night football highlights show Match of the Day (MotD).

The three BBC buildings on the MCUK site, including Quay House, are connected to each other and The Studios on a fibre ring WAN installed by Peel Media. This WAN feeds incoming lines, dedicated BBC vision and MADI signals to The Studios centre. Local video is routed through a core HD-SDI video matrix, while audio goes to a core MADI I/O and routing system. These two processes are connected by additional audio embedding and de-embedding.

Boden says that while the intention was for any of the studio floors to be run by any gallery in The Studios building, network connectivity makes it possible for the studios to be controlled from galleries in the BBC buildings.

MotD, the Sunday evening MotD 2 and Football Focus are broadcast from HQ3 in The Studios block. The galleries for this studio have been heavily customised for this, says Boden.

A production room has been set up nearby where the show's experts can watch footage of the different matches coming in on multiviewers. This room also houses a Riedel commentary system, which can be used with lip mics by 5 Live commentators.

Another aspect of the customisation is specialist company deltatre Media provision of graphics for BBC Sport using VizRT systems. While Pixel Power has been installed as standard in The Studios, VizRT had to be included for sports coverage because, as Knight observes, the "rest of the world" uses it.

A similar co-habitation takes place on the broadcast networking and routing side. The production galleries house control monitors for both the BBC's BNCS (Broadcast Network Control System) and the LSB International VSM (Virtual Studio Manager) system installed by MCSL as its standard network program.

TVTE's next visit to MCUK will look further at the networking set-up and how it connects The Studios with the post-production, control and audio facilities.