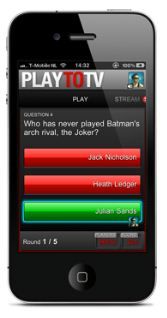 At this year’s IBC exhibition proponents of second-screen viewing will argue that consumption of “companion” content on a second-screen device—whether it be a mobile phone, a laptop or an iPad, while simultaneously watching a show on the main TV set—is more of a natural fit with viewing habits than OTT services. They will argue this for one simple reason: we’ve already started doing it.

Whether tweeting friends during a talent show or going online to a sports forum to discuss the man of the match, it’s already happening. The big challenge for “Connected TV” meanwhile, is the renewal cycle. People change phones and tablets on average every two years, but only tend to change their TV sets every five to 10 years.

What many in the first-wave of second-screen apps are doing at present, however, is not rocket science—it’s quite basic: filtering out the noise of social media and creating more bespoke applications for specific TV shows.

Game shows are one genre already making the most of the second screen. Dutch software firm ExMachina’s second-screen platform PlayToTV enabled RTL Group viewers of “The Voice” to listen to performances on second-screen devices prior to the show’s broadcast. Users were then able to give their predictions on the contestants’ performances, which were fed back into the live T

Another RTL Group quiz show, “Intuition,” pushed the envelope further, devising a TV show with second-screen applications in mind as players at home were able to perform a key role in the quiz and were rewarded with discount vouchers. According to ExMachina’s CEO Jeroen Elfferich between 6 and 10 percent of all viewers played along.

“That’s high, as the average conversion rate is around 2 to 5 percent,” said Elfferich. “By the end of the series one, once the audience had become familiar with the format, one in three people requested the coupons.”

Elfferich, who is set to speak at the IBC session “The Rise of the Second Screen,” adds that the PlayToTV platform will also play an important part in the Dutch election coverage this month when it’s set to power broadcasters’ second-screen applications.

The platform claims to provide real-time feedback to the studio, making it the perfect platform for conducting polls and feeding the results back into the live coverage and debates.

Sport is another well-positioned genre for second-screen applications. Take the Olympics, for example. Would you like to look up the rules of beach volleyball? Or perhaps a viewer is watching the games in a different country, but requires the commentary in their native tongue? These are all companion apps that second-screen practitioners are currently working on.

VOTE OF CONFIDENCE As a vote of confidence in second-screen technology, this January BSkyB bought a stake in Zeebox, the social-networking television website and software app, which provides contextual information second-by-second as people watch TV. Sky plans to integrate the software into its offering and will no doubt use its marketing muscle to drum up interest in second-screen apps.

A further move to support the second-screen cause happened this March when U.K. firm Monterosa—developers of the play-along Web game for Channel Four’s Multimillion Pound Drop—announced it was opening up its platform (albeit in an “invite only” capacity) to allow third parties to use some of its tools.

There are a couple of fundamental second-screen technologies that software companies are working with in this space. The first set are “push” technologies where the software is usually tied into a TV gallery/playout facility where there is literally somebody pushing a button to release the information onto devices. Push technology—used by the likes of Monterosa and Zeebox—relies on TV schedule data that it can also utilise to offer viewers extra options based on existing subtitled information (i.e., providing links to Wikipedia and other online information sources).

The second model, which is more complex for live productions given that there is a slight lag in transmission times in many territories, is the “pull” model. This relies on viewers sitting at home literally pulling information off the signal. The pull model involves second-screen apps that integrate image and audio-recognition technologies that can be embedded into the soundtrack of a TV show. Companies working in this space include Shazam Entertainment, whose CEO Andrew Fisher is also speaking about advertising opportunities and the second screen at IBC2012. Other technologies focussed on the pull model include image-recognition applications produced by companies such as Israeli start-up TVtak.

TVTak’s platform claims to enable a TV viewer’s iPhone to identify, within one second, the show they are watching simply by pointing the phone’s camera towards the screen. From here it will work out exactly what the show or ad that they are watching is and enable viewers to share details of the show via Twitter or Facebook, with a comment attached.