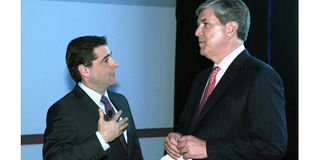 LAS VEGAS: Julius Genachowski stood before a roomful of broadcasters Monday afternoon and urged them to give up their spectrum.

“Don’t be afraid to be interested in the incentive auctions,” the Federal Communications Commission Chairman said. “You’ll be able to participate in an active marketplace providing a sizeable cash infusion for returning some or all spectrum.”

Genachowski delivered his NAB Show remarks to around 450 people, many of them broadcasters, who privately say they have no intention of doing so. However, Genachowski said FCC phones had been ringing “with broadcasters… expressing genuine interest in participating and asking thoughtful questions.”

Congress recently authorized the FCC to hold an incentive auction in which broadcasters receive a share of the proceeds for relinquishing spectrum for wireless broadband. The FCC since formed a task force to implement what Genachowski described as a “robust public process,” with webinars, workshops, public notices and proceedings. One of the first among those is a channel-sharing order on the commission’s April 27 public meeting agenda. Channel sharing is one of three methods for participating in the spectrum auction, along with moving from a UHF to a VHF assignment, or turning over all 6 MHz comprising a TV channel. Genachowski said participation could be opportunistic for broadcasters, particularly the 40 percent that don’t receive retransmission fees from cable and satellite operators.

“In the case of a move to VHF, a broadcaster would stay on the air, retain must-carry rights on cable and satellite, and generate cash from the move,” he said. “As for channel sharing, it provides an opportunity to retain UHF transmissions, but to trade in a portion of channel capacity in exchange for a cash infusion.”

Genachowski said more information about participating would be made available over the next few months. Currently, a channel-sharing workshop is on deck for May, with an auction-design workshop in the months ahead and related Notices of Proposed Rulemakings by fall.

“The core idea is this: Don’t miss the boat on an opportunity you might regret passing up.”

Genachowski said the auction process would be “open, honest, inclusive, fact-based and guided by economics and engineering.” He announced the appointment of Gary Epstein, a Washington telecom attorney and former FCC Common Carrier Bureau chief to the task force, which is headed by Ruth Milkman, special counsel to the chairman.

“The fundamental purpose of incentive auctions is to bring market forces to bear on spectrum,” Genachowski said.

The chairman also invoked market forces with regard to retransmission, though he kept the reference brief. He reiterated that the FCC would prefer to stay out of retransmission consent negotiations, but that “the calls for agency intervention continue.” Genachowski said the commission is watching the marketplace “carefully to determine whether further… action is warranted.”

The 2012 NAB Show marked the chairman’s third appearance at the convention. He opened by trading friendly jabs with NAB president and CEO Gordon Smith, a Brigham Young grad who joked that Genachowski was a “certified smart guy” who attended the “BYU of the East, otherwise known as ‘Harvard.’”

Genachowski recalled how, at his first show appearance, Smith likened him to “The Godfather” after he’d introduced the concept of incentive auctions. He then congratulated Smith for his five-year contract renewal, saying someone must have “made him an offer he couldn’t refuse.”

The FCC chairman’s normal timeslot is 7:30 a.m. Tuesday, but Genachowski was bumped this year by “a zen master of social media,” the actress Betty White, who just started tweeting a week ago. White is being inducted into the NAB’s Hall of Fame.

Broadcasters who oppose the move have “elected to position themselves against technology, against transparency and against journalism,” he said.

One point of contention is cost. Genachowski argued that posting files online would save money once the transition was complete. Broadcasters—including the NAB—have argued that requiring disclosure of broadcast political advertising files is not the FCC’s purview.

“That argument is refuted by the plain language of the law,” he said. “The FCC’s role here is clear, essential and very long-standing.”

Genachowski said some of the more “preposterous” arguments against uploading disclosure files had come from “outside the NAB.”

He closed by saying broadcasters and the FCC had a “lot of work ahead.”