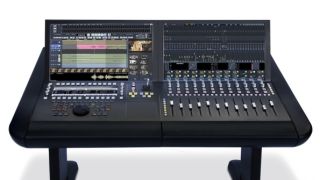 If you have a historical understanding of music production techniques, then you know that just about a quarter of a century ago, two companies, New England Digital and Fairlight, were waging a mighty battle to see which one would reign supreme in the newly crystalized world of sampling.

Low-end companies (Casio, for example) introduced samplers that sounded ok, but the Synclavier and Fairlight boxes were sine qua non — provided you had 100k or so to drop.

But, a small company called DigiDesign, the brain child of one Peter Gotcher, had plans to tether digital recording to the personal computer and... ah, you know the rest of the story. N.E.D. eventually bit the dust, but Fairlight survived, in large part due to the emphasis the company placed on post production products.

Fairlight is introducing its newest product, a mid-size board designed for the audio post community, at the AES show in San Francisco. The strategy is clear: Harness all of the areas that Fairlight has excelled in over the years and roll them into a console (configured with either 12 or 24 faders) that has a footprint small enough to fit into real-world spaces.

The success of the Quantum may depend, in part, on the number of audio post engineers who create sound design (and to a lesser degree, music) for the projects they work on, since VST plug-ins and instruments are fully supported. Price, of course, will also be a major factor; Fairlight’s initial press release did not give pricing information, but if you’re not heading out to San Francisco you may want to check the company website, www.fairlightus.com, for details.

(Also, I won’t be there, but I’d be interested in hearing from anyone who has a chance to take this console for a spin.)