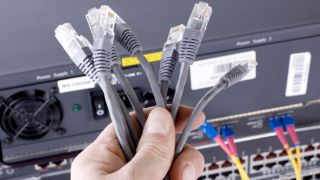 Ethernet and IP are terms broadcast engineers use many times every day. But what, exactly, is the difference between the two?

Many years ago, manufacturers needed to include, inside their application programs, software that was written to allow the program to interface to a specific network interface card. This meant that an application would only work with specific networking hardware; change the hardware, and you had to rewrite the application. Very quickly, vendors faced an escalating number of possible network devices and a number of different underlying physical network implementations (such as RG-11, RG-59 and UTP cable).

Manufacturers wanted to separate the development of their application from all of the chaos going on at the networking level. They also wanted to be able to sell their applications to different users who might have different networking technologies in their facilities. The seven-layer Open System Interconnection (OSI) data model was developed to address this issue in a standardized way. While it is not too important to understand all layers of the OSI model, it is good to understand the first four layers. (See Figure 1.)

Figure 1. This shows the first four of seven layers to the OSI data model.

Layer 1 is the physical layer, sometimes referred to as PHY. This is the physical network hardware, and it operates at the bit level. Layer 2 is called the data link layer and consists of a mixture of specifications describing the electrical signals on a cable and the way that data is encapsulated into frames. Ethernet is a Layer 2 protocol. Layer 3 is referred to as the network layer, and it is here that data is encapsulated into packets. IP packets are referred to as datagrams. Layer 4 is the transport layer. Here, we speak in terms of sessions. Transmission Control Protocol (TCP) and User Datagram Protocol (UDP) are Layer 4 protocols.

Each of these layers plays a role in networking. Importantly, Layer 2 is responsible for physical addressing, meaning that the network architecture can rely on the fact that a Layer 2 address is unique and permanently assigned to a specific piece of hardware. Layer 3 is responsible for logical addressing, meaning that addresses are assigned at this level by a network engineer in a way that organizes network clients into logical groups. But, neither of these two layers are responsible for anything more than “best effort” delivery of packets from one place to another. If the packets get lost, duplicated, rearranged or corrupted, neither Layer 2 nor Layer 3 will do anything about it. Layer 4 protocols are responsible for establishing end-to-end connections called sessions, and these protocols may or may not recognize the loss of packets and do something about it. TCP, for example, will request that lost packets be resent. UDP will not. (Remember that Ethernet operates at Layer 2, and IP operates at Layer 3.)

Ethernet and IP are part of a hierarchy of interchangeable technologies in the seven-layer OSI stack. While most of the networks that broadcast engineers are likely to encounter today are Ethernet and IP, it is important to understand that, in the early days, Ethernet was just one of a large number of competing Layer 2 technologies. Other Data Link Layer technologies include ATM, Token Ring and ARCNET.

While Layer 2 does a great job of organizing data into frames and passing them on to a physical network, it is not capable of allowing network architects to group computers into logical networks and allowing messages from those computers to be sent (or routed) to a much larger campus or even worldwide network. This is where Layer 3 comes in. IP operating at Layer 3 organizes data into datagrams, which can be sent across any Layer 2 networking technology. IP datagrams are the same size and the same format, regardless of whether these packets are sent across Ethernet, Token Ring or some other network. In fact, you might be surprised to learn that IP packets from your computer may first travel over Ethernet, then over a SONET for long-distance transmission, and then be put back into Ethernet for delivery on a local network at the destination.

IP is not the only Layer 3 protocol in common use today. There are a number of other critical protocols that operate at this layer, many of which have to do with configuring and maintaining networks. Internet Control Message Protocol (ICMP) and Open Shortest Path First (OSPF) are two examples of this.

In summary, Ethernet and IP are part of a hierarchy. IP packets are carried in Ethernet frames. IP packets that travel over long distances are likely to be carried in the payload portion of SONET frames. Furthermore, when you see the notation TCP/IP, remember that TCP is also part of this hierarchy. It is highly likely that every time you see this notation used in reference to traffic on a LAN, remember that you are actually talking about TCP over IP over Ethernet.

There are many other differences between Ethernet and IP that are derived from the fact that they are on different layers of the OSI model.

Remember that the point of adding IP as a layer on top of Ethernet is to allow the IP packet layout (and the application software above that layer) to remain constant while providing different underlying Layer 2 structures. Basically, if you change the network, then you change Layer 2 drivers, and perhaps Layer 1 hardware, but everything above that layer remains the same.

From a practical standpoint, there are significant differences between Ethernet addresses and IP addresses. Ethernet addresses are assigned to a network interface card or chip set at the factory. They are globally unique, cannot be changed (not true, actually, but this was the original assumption), and getting an Ethernet configuration up and running essentially is a plug-and-play process. IP addresses, on the other hand, are not assigned from the factory. These addresses need to be configured (sometimes dynamically), and while Dynamic Host Configuration Protocol (DHCP) works very well most of the time to automatically configure IP addresses, there are many cases where broadcast engineers must manually configure the IP address of a device before it can be used on the network.

Another difference is that the first three octets of an Ethernet address convey meaning; they are an Organizationally Unique Identifier (OUI). It is possible to look up an OUI and determine who assigned the Ethernet address to the hardware. IP addresses, however, have absolutely no meaning assigned to them. That is not to say that there are not special IP address ranges because there are. But, the numbers themselves do not convey any specific information.

In order to extend the network beyond this length, you need to be able to route signals from one physical Ethernet network to another. This was one of the original design goals of IP. Network architects assign computers to IP addresses based upon physical location and corporate function (news vs. production, for example), and then IP routers automatically recognize whether packets should remain within the local network or whether they need to be routed to the Internet.