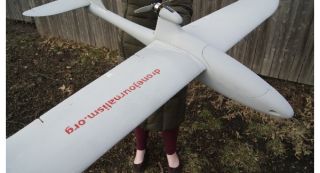 LINCOLN, NEB. and CHAMPAGNE, ILL.: For TV news crews, operating an “eye in the sky” means hundreds of thousands of dollars per year in aircraft maintenance and fuel costs. Using choppers also comes with inherent risks that have resulted in numerous accidents over the years.

As stations look to save money while reducing safety concerns, some in the news business are beginning to examine the use of unmanned aerial vehicles to obtain highly valuable news coverage from above. While it’s a relatively new concept for journalists, the technology of “drone journalism” is familiar and extremely cost-effective when compared to traditional aircraft.

In essence, drone journalism involves the use of remote-controlled small aircraft outfitted with cameras to acquire footage from the air. What defines “aircraft” could be anything from a toy helicopter purchased at the local mall to more sophisticated devices, and the camera could be a typical point-and-shoot to a more expensive DSLR with video capabilities.

There’s just one problem: The use of such devices is illegal in the United States—for now, at least. last month, as part of its latest budget, Congress gave the Federal aviation administration until 2015 to develop a set of rules and guidelines authorizing the commercial use of such remote-controlled unmanned devices. and several researchers and entrepreneurs are already exploring the technical—and perhaps even more important—ethical uses of these drones.

Matt Waite, a professor of journalism at the College of Journalism and Mass Communication at the University of Nebraska-Lincoln is one of a handful of journalists studying the concept of drone journalism, and recently established a “drone journalism” lab in late 2011. Waite, who has an avid interest in cartography, says he got the idea while attending a mapping conference in San Diego last summer.

“I saw this Belgian company selling a fully autonomous fixed-wing, little aircraft that had a computer and camera onboard,” he said. “It was controlled by a tablet computer, and watching the product demo was amazing. I said ‘here’s my credit card, how can I take one home?’”

The drone was the Gatewing X100, specially developed for aerial mapping and surveying. But while this particular UAV was pricier than most ($65,000), Waite believes that with a little ingenuity, a camera-equipped drone could be had for less than $1,000. For his part, Waite’s drone is a “parrot AR” drone quadrocopter (a helicopter with four rotors) purchased at Brookstone, with a $200 Gopro “Hero” 1080p HDcam attached.

“The highest I’ve gotten mine is 30 to 40 feet in the air, but that’s because it uses Wi-Fi as the control link,” he said. “It’s really small but not really reliable.”

With improved technology, Waite believes such devices could provide a cost-effective alternative to chopper-based traffic reports. While the flying times for drones are shorter than helicopters, Waite envisions a scenario in which drones could be positioned in various areas around a region, take off from a given spot, fly around specific areas for a brief period of time and then return to a platform for recharging. “And you could probably do that every 15 to 20 minutes,” he said. “if you’re doing an hour-long broadcast over that time, that’s pretty easy. Now I can have four or five of those things in the air for a heck of a lot less money than I would have to spend on a helicopter.”

Matthew Schroyer, a drone and data journalist at the University of Illinois-Champagne created dronejournalism.org as a forum to discuss and share ideas about the subject and is developing a UAV dubbed the “JournoDrone,” based on designs fromdiydrones.com. Schroyer is approaching the subject matter more from a data-gathering standpoint, using still photographs to stitch together maps from aerial surveying.

“We are getting to the point where a journalist can build a drone for himself and fly it and use it to collect all sorts of interesting data and information that you couldn’t get before without this perspective,” Schroyer said. “These platforms are so versatile… I could really see this technology 'taking off' and being adopted in a lot of newsrooms.”

Up until now, most of the public has become aware of drones through news reports about their use in military operations—and then only when something goes wrong. This has created a public relations problem that both Waite and Schroyer believe could be compounded if the commercial use of drones is abused, specifically to violate people’s privacy.

“We don’t send photographers to people’s houses with long telephoto lenses and we don’t trespass on someone’s private property to use those lenses to take pictures through people’s windows,” Waite said. “Why would using a drone make that any more OK? It wouldn’t. There are significant questions of people’s rights, the right to assembly and the government’s powers to monitor people that come with this technology.”

The lack of a “roadmap” to the use of drone technology is one the main reasons Waite and Schroyer have established such programs.

“Because of the commercial restrictions and because the technology is so new, this is a rare opportunity we have to really study what the ethical implications are of something and what the consequences may be and what steps we should take to mitigate criticism long before we get a drone in the air,” Waite said.

What happens if the paparazzi start using drone cameras to spy on celebrities? How far would they go? This is one of Schroyer’s concerns.

“The entire field of drone journalism could be stifled by one incident and then we could lose all this reporting ability,” he said. “We don’t want that to happen.”

The ethical guidelines for journalists’ use of UAVs shouldn’t be all that different than those for hidden cameras, according to Mike Cavender, executive director of the Radio Television Digital News Association.

“What’s your motivation for obtaining the information?” Cavender asks. “Ultimately this is an editorial question and it doesn’t matter whether you’re using a camera in a briefcase, a lapel pin or a drone.”

These kinds of questions have prompted Waite to hold off on whether the subject of drone journalism is worthy of extensive academic exploration. “Drones are a tool, like your smartphone or your car. These are things that we use to tell stories,” he said. “it’s not creating a fundamentally new way to tell stories.”