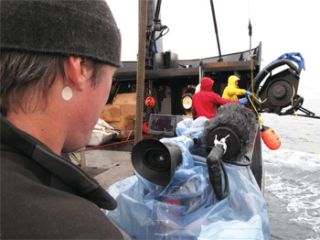 SEATTLE—When a new cameraman heads out on a king crab boat to shoot his first episode of "Deadliest Catch"—the Discovery Channel's popular reality show documenting the lives of crab fishermen in the Alaskan waters—he's got to be a fast learner.

"Essentially you learn the boat as quickly as is humanly possible," said Jeff Conroy, vice president of programming and executive producer Original Productions, a FremantleMedia company, which produces "Deadliest Catch" and a slate of other dangerous occupation programs. "You have to understand how the machines work, how all the people work."

Conroy laughed when he spoke about a cameraman's first couple of days on the boat. "They always shoot from one spot, and that typically coincides with a post on the deck that they can hold onto. They'll stay in a safe spot and move the camera to follow the action until they get more comfortable."

He said it's a matter of establishing trust with the crab boat's crew. "You have to constantly go, 'Hey, is it OK if I go here? Is it OK if I go there?' The biggest thing is not doing things that surprise the crew, because if you surprise them, you aren't going to be able to go where you want to. They'll say 'Don't move from this spot.' But if you can get a communication going with them, build a trust, then most of the guys will help you, even start working for you. 'Hey, you can go over there. That's a better spot.'

The Original Productions staff puts a lot of time into researching equipment rugged enough to survive the extreme conditions on "Catch" and the company's other extreme environment shows. But while out on location, cameramen need to have a "MacGyver" streak in them, to solve problems with what they have at hand.

"Each show is different," said Conroy. "With our recent program 'Coal,' we knew we would be dealing with huge coal dust issues. So we tried a solid-state camera, because we thought that using tapes in that environment would just be deadly, too much dust getting into the tape drive mechanism. We actually did really well. We didn't really kill cameras like we have on other shows."

Kill cameras? Conroy's boss Thom Beers, CEO of Original Productions wrote the check for the 60 cameras the company went through for last year's 16 hours of finished Deadliest Catch episodes. Fortunately, he said, technology has dropped the price of HDV camcorders into the $3,500 range. He contrasts these new camcorders with the ones available in the marketplace only a few years ago, when acceptable HD camcorders might easily run as much as $100,000 apiece. "Can you imagine working with 40 or 50 of those, throwing them away? That's $4-million, as opposed to $300-thousand!"

New is not always better, said Conroy. When the show made the switch from SD to HD production a few years ago, the new HDV camcorders had a lot of input and output ports, buttons and knobs that they weren't going to be using out at sea. "We killed so many cameras," he said. Part of prepping any camera is to seal up any port, button or knob that's not going to be used. "On the LCD screens, we put a bead of silicon, because that's a great place to get moisture in."

To record media for the main cameras used on "Catch," the cameramen use mini-DV tape, recording in HDV format.

With rain and spray a constant while aboard the crab boats, it's not surprising that the company has tried a number of commercial rain covers. But they found that once sea water got in, it held the moisture against the camera. So for "Catch," their cameramen have standardized on 15 gallon Ziplock bags. They cut a slit for the lens and another for the LCD screen. "Everyone kind of creates their own," said Conroy, "it's kind of like an arts and crafts project." There's lots of electrical tape involved. Camera operators reach up through the Ziplock opening to operate the camera.

There are other cameras placed in static positions around the boat. "It's become kind of a game with our guys, who can get the best angle," he said. They found a waterproof solution in the HD surfer cameras, designed to mount on surfboards. There's no audio, no video monitoring, no remote start and stop, but they run for an hour recording to an SD card. "The guys put them on the pots, inside the pots, inside the cranes, on guy's chests, on their heads."

"Ice Road Truckers," a popular reality show on the History Channel, provided some other challenges, because of the extreme cold. One problem was that the LCD screens froze up. Solution: they taped hand warmers to the back of the screen to warm it up. In that cold, the cameramen also found that a camcorder recording to disk worked the best.

"Audio is hugely challenging," said Conroy. First off, there's barely enough room on the boat for a cameraman and producer, so they can't use a dedicated audio operator. They have some waterproofed fixed mics on deck and in the wheelhouse that are recording audio all the time. And then they mic a couple of crew members on deck. That called for another invention.

The crewmembers don't want to clip the microphone on," he said. "They don't want any extra cables being around on them, they're always afraid of getting tangled in something."

Solution: The mic cable and a wire from a coat hanger are slid into a flexible plastic tube, with the waterproof mic head sticking out one end. The wire goes inside the coat with the mic head just sticking out. The other end of the mic cord connects a wireless transmitter on a lanyard around the crewmember's neck. That audio is transmitted to a wireless mixer located off deck in a dry environment. From the mixer, the audio is transmitted to the cameraman's camcorder or to a fixed camera for recording.

Still, Conroy said audio is a problem. "You've got so many noisy machines, so much interference, that our editors spend a lot of time in post production cleaning up the audio."

The producer aboard the crab boat is in daily contact with the home office via satellite phone, and does general logging of the tapes and other media, along with story notes. Media and notes are offloaded whenever crab is offloaded, generally between one and two weeks. He said that back at the production facility the media is carefully logged, and from the producer's notes and instructions the story for an episode is put together. "Of course it can all change when you look at the footage."