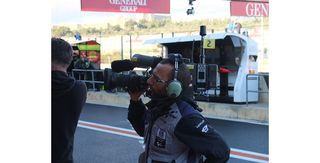 Gigawave took InCam, its new integrated wireless camera system and the new Clip-On 4 wireless camera transmitter—both first shown at IBC 2012—to the MotoGP Championship to be put through their paces by Dorna Sports, the exclusive commercial and television rights holder for the FIM Road Racing World Championship Grand Prix - MotoGP.

The Gigawave InCam system was used during practice and qualifying and proved highly popular with cameramen. Designed in co-operation with Sony, InCam marks a departure from the traditional method of attaching wireless transmitters to a camera’s rear battery plate by fitting snugly within the body of Sony’s new HDC-2500 camera, which provides advantages in terms of weight distribution and streamlined configuration functions, according to Vislink.

The Clip-On 4 is designed for use with both HD and SD cameras for ENG, OB and studio applications. It has ultra-low latency of half a frame (20ms) with H.264 encoding. Dorna used the Clip-On 4-equipped camera throughout the championship weekend with no intervention required by Gigawave’s on-site support team.