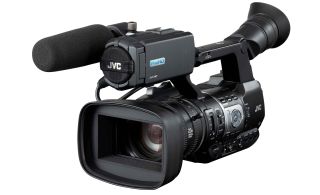 With a 1.22-megapixel color viewfinder and color 3.5in LCD, the GY-HM600 is versatile enough to handle tripod-based shots and run-and-gun situations. It is equipped with three, 1/3in 12-bit CMOS sensors, each with 1920 x 1080 pixels. The built-in Fujinon HD lens features a wide focal range of 29mm-667mm (35mm equivalent) and has manual focus, zoom and iris rings, along with three ND filters. Other features include autofocus with face detection and an optical image stabilizer.

The lightweight camera records HD or SD footage in multiple file formats, including native XDCAM EX (.MP4), Final Cut Pro (.MOV) and AVCHD, to nonproprietary SDHC or SDXC media cards. In addition to relay mode for uninterrupted recording, the GY-HM600 allows simultaneous recording to both memory cards for instant backup or client copy. Plus, the Pre Rec (retro cache) feature continuously records and stores up to 20 seconds of footage in cache memory to help prevent missed shots of breaking events.

Equipped with a LANC-based remote connector and compatible with JVC's ProHD Compact Studio 7in monitor, the GY-HM600 can be used for an affordable studio system. The camera also includes a timecode synchronization input as well as HD-SDI and HDMI outputs. A built-in stereo microphone is ideal for capturing natural sound, but the GY-HM600 also includes two XLR inputs with phantom power, shotgun mic holder, headphone jack and additional input for a wireless mic receiver.

Another new ProHD camera, the GY-HM650, will be available this winter. Specifically designed for mobile newsgathering, it has similar specs to the GY-HM600 but includes built-in FTP and Wi-Fi connectivity. With its dual codecs, it simultaneously produces full HD files and smaller, Web-friendly files that can be delivered to a station without a microwave or satellite connection.