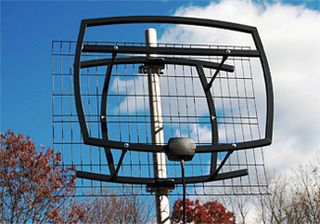 I viewed my first television image when I was all of six years old. What made this event remarkable was that the TV station was some 200 miles distant—really deep fringe reception. My dad was an early television adopter and that was the closest station. After the initial thrill of receiving snowy images wore off, he spent a good deal of time and money trying to improve the picture with a succession of "boosters" (pre-amps) and various antennas.

The Antennas Direct ClearStream 5 high-band VHF television antenna After several years, a cluster of "local" stations arrived and my father's antenna experimentation ended. I was interested in TV dxing by then and began constructing my own antennas. In the process, I developed an appreciation for what an antenna could and couldn't do.

Fast forward 50 or so years to the 21st century and the DTV transition.

I own a weekend home some 45 miles from the Washington, D.C. cluster of transmitters, and several years ago decided to go digital HD at the "country" house.

Not wanting to erect an outside mast, I contented myself with an attic-mounted "bowtie" array, as all of the D.C. DTV was being pushed out in the UHF spectrum.

Fast forward again to the June 2009 DTV "transition." The television "picture" changed here, with the ABC and CBS affiliates giving up their temporary DTV UHF berths and taking 8-VSB to their old Ch. 7 and Ch. 9 analog slots, respectively. I rescanned on that fateful June night and found that by some miracle of rare device the UHF-only antenna defied physics and nailed the Ch. 7 signal. However, Ch. 9 was missing (as in "no signal").

As the home is only used on weekends, this wasn't really considered that serious. I vowed that someday I'd get around to putting up a VHF antenna for the lost Ch. 9.

Finally I got the chance to try out a high-band VHF antenna from Antennas Direct, and decided to brush aside my dislike of dust, confined spaces, and maybe some lurking critters to install a second attic antenna.

The Antennas Direct ClearStream5 (C5) "high gain digital VHF" antenna is quite deceptive. It arrived in a 2.5 x 23 x 29.5-inch box and weighed only a few pounds. I was quite skeptical about the accompanying reception claim of up to "65+ miles," due to its small size. The box seemed way too small and light to contain a serious VHF TV antenna.

A graph on the package indicated that the antenna had a gain of 7 to 8 dB, and the documentation stated that great care went into proper impedance matching.

The C5 consists of two pieces—a more or less rectangular "loop" with a small box at the bottom sporting an output connector. The other member is similar to the "loop" but is in the form of a sideways "H" affixed to a mesh element that is obviously a reflector, but one that seems more in keeping with what you'd find on a UHF bowtie rig. The hardware supplied consisted of screws, washers, spacers, and U-bolts for mast mounting. There was also a V/U combiner (diplexer) in a nice weatherproof enclosure.

As I really wasn't too keen about working in the attic, I decided to assemble the antenna down below to see how things fitted together, then take it apart and squeeze the pieces through the hatchway.

Assembly was surprisingly easy, taking no more than 10 minutes. It consisted of joining the two sections via the supplied spacers. The only tool required was a Phillips screwdriver. The U-bolts for mast attachment came with wing nuts, so I didn't even need the usual 7/16-inch wrench.

Once the antenna was assembled, it looked even smaller than I'd imagined.

Eight dB of gain from that?

I decided to try it out "on the ground," as I really didn't think it was up to nailing the D.C. stations from such a distance, and didn't want to take it to the attic if it didn't perform.

I located a 10-foot length of plastic pipe to serve as a mast and supported things via a patio table that came equipped with a hole and base for a large umbrella. The table was located on my deck, providing an antenna elevation of perhaps 12 feet AGL.

I sighted the antenna in on an appropriate bearing for the Ch. 9 transmitter, ran a temporary feedline to my DTV receiver and punched in 9.1 on the remote.

I hadn't really expected much right away—perhaps at best some "stuttering" and breakup. Was I ever surprised!

Almost instantly a football game in HD popped up. No tweaking of the antenna was necessary and the image was extremely solid.

After following the game for a while, curiosity overcame my interest in football and in the pursuit of science I removed the antenna from its mast and brought it indoors.

I parked it on the den floor, and with just a little tweaking and shimming, the game reappeared—solid as a rock. The height AGL was now only about three feet. This is one remarkable antenna.

Rather than retreat to the attic, I left the unit on the floor and viewed the remainder of the game. When it ended (my college team won), I uncabled things and journeyed to the attic hatchway. On a hunch, I elected not to take the C5 apart, and found that it easily fit through the 23x29-inch hatch opening.

The C5 is now mounted alongside my bow-tie array and performs very nicely. There was a slight hitch when I tried to mount the combiner enclosure. It's a nice box, but the mounting lip and the supplied wing nuts are not compatible. There's not enough clearance between the edge of the housing and the U-bolt legs to allow the wing nuts to be snugged down. This wasn't really a problem in my case, as the antenna and combiner were in a nice dry attic. I omitted the box and fastened the combiner to a truss with a wood screw. (Hex nuts could be subbed for the wing nuts if the antenna is used outside.)

I was very pleasantly surprised with the performance of this "little" antenna. It did everything claimed and then some. It's nice to have CBS back in the fold too.

If I had to change anything, it would be to add lock washers to go under the wing nuts used to attach the U-bolts to the mast. I imagine that even when fully hand-tightened, wind vibration will eventually loosen the wing nuts and allow things to move.

After the testing was completed, I couldn't help but think that with the performance of this antenna, some of the now "disenfranchised" stations that reverted back to their high-band VHF slots might benefit from it. Rather spend money in seeking out UHF spectrum, they might just be better off to buy these antennas in bulk and pass them out to former off-air viewers. This just might be the solution for some stations too when the next UHF spectrum land grab happens.