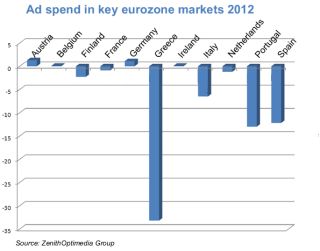 Worldwide spending on advertising is expected to grow 4.6 percent next year, with Central and Eastern Europe experiencing growth of 7.4 percent following a tough 2012, according to the latest forecast from ZenithOptimedia Group.

Overall ad spending will reach $525 billion by the end of 2013. The Asia-Pacific region, excluding Japan, will grow by 8.2 percent and Latin America by 10.1 percent next year, ZenithOptimedia predicts.

Even North America, which has seen strong ad spending this year due largely to record Olympic audiences and political ad spending by candidates for U.S. political offices, will see an increase of 3.6 percent in 2013, the forecast says.

“Advertisers are broadly continuing to invest, despite the global economic concerns and issues,” says Steve King, Global CEO for ZenithOptimedia Group. “However, they are seeking to ensure that any expenditures are delivering strong return on investment. The U.S. continues to deliver solid growth. This, combined with the growth in developing markets and in digital media, has helped mitigate the drop in eurozone spending.”

The Internet also is the biggest source of new ad dollars worldwide. ZenithOptimedia expects Internet advertising to account for 60 percent of growth in overall ad spending between 2011 and 2014. Television will account for 41 percent of the growth. (The total is greater than 100 percent because newspapers and magazines are subtracting from total growth, according to ZenithOptimedia.) Over the past few years, TV’s share of the worldwide ad market has grown, from 36.9 percent in 2005 to 40.2 percent last year.

ZenithOptimedia expects the European football championship, the 2012 London Olympics and the U.S elections to help lift television’s share to 40.4 percent of global ad expenditure in 2012, its highest ever.