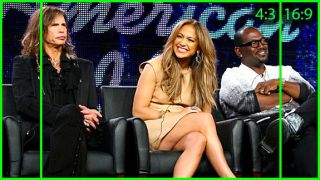 If there is one thing mobile handset producers cannot agree on, it’s aspect ratio. For years mobile devices and mobile TV options have been all over the map. Many started with a 4:3 aspect ratio, the same as television used for decades before switching to 16:9 widescreen. But there could be a change in the air as mobile companies see that 16:9 may be the aspect of choice in the years to come.

The traditional aspect ratio of 4:3 is fairly square; it’s been the standard go-to format for many tablets and smartphones for several years now. Thousands of apps have been developed on multiple platforms to closely adhere to the 4:3 aspect ratio, beginning with the iPhone and then with various Android variants. The problem has been when mobile video comes into the picture. With older programming, such as a lot of the catalog of content like Netflix streaming, the 4:3 ratio has not been much of a problem. The older-style program fits better within the 4:3 framing. But widescreen content, in the form of network television shows and widescreen movies, have been a bit more of a challenge. Until now the widescreen content has had to be shrunk down to the 4:3 format, causing the 16:9 format to be displayed on a 4:3 screen, with the result being black bars on the top and the bottom of the mobile device screen. Black bars on a home theater big screen is one thing, but on a 3- to 5in mobile screen, too much of the area is taken up by sheer blackness.

But a new wave of devices could be changing this. Notable recent releases include Google’s Nexus 7 tablet. The 7in tablet’s 1280x800 resolution more closely aligns with the 16:9 resolution of most of today’s current HD mobile content. Looking at the device it is immediately apparent, in a sea of iPads, the Nexus 7 has a much slimmer and narrower feel, and it fits HD content more accurately. Although hardly the first tablet to feature a widescreen aspect ratio, it’s certainly notable that Google’s first major foray into the tablet market embraces the aspect that has up until now been less widely used for mobile content devices.

Samsung’s Galaxy Note has been updated to the Galaxy Note II, a large-screen mobile device that has also made the jump to a wider aspect ratio. In fact, it’s 1280x720 - which is pretty perfect for displaying 16:9 content and apps such as Netflix - on-demand HD content should feel right at home as well. Incidentally, while 1280x720 sports a 16:9 aspect, 1280x800 is also close, with a 16:10 aspect. Devices using either aspect, or even either resolution, can optimally accommodate HD content, while ridding the viewer of large black bars.

Most consumers may not be aware that any cropping visually is happening to their mobile TV content when a device is using a screen closer to the 4:3 aspect ratio. Do you have an iPhone 4 or 4S? Shoot some video and then double tap on the screen. You’ll see the true dimensions of the actual video when the video shrinks and reveals the black bars framing the widescreen content being created.

Speaking of the iPhone, the most heralded switch to widescreen in a mobile device happened recently with the release of the iPhone 5. The new iPhone elongated the screen with a spiffy new 4in 1136 x 640 retina display, and the biggest advance is that you can now accurately view 16:9 content on your iPhone for the first time. Swing the unit on its side and mobile video suddenly is seen as it originally was intended, in perfect widescreen and matching the aspect of much of the current HD content produced.

Although mobile TV video is the biggest benefit of the acceptance of 16:9 aspect ratios, mobile devices do so much more, so apps and software must be reengineered to accept these new dimensions. Apple’s next move is the rumored iPad mini, a iPad in the 7in realm. Although recent tablets have moved close to the 16:9 format, such as the Kindle Fire HD which comes in at 16:10 and 1280x800, it will be interesting to see which way Apple moves with the new iPad. Will it be closer to the 4:3 specs of the company's latest 2048x1546 New iPad, or will it gravitate toward the widescreen 16:9 1136 x 640 specs of the iPhone 5? While the world waits to see what Apple has in store with the (rumored) new smaller iPad, many will be wondering if the 16:9 revolution will take another big step forward.

Why is this important? Because although the future of television may well be 16:9 aspect, the huge landscape of mobile smartphone and tablets for mobile content is a lot less clear. But there seems to be some unity happening and it looks like the standard of 16:9 could also be coming to most, if not all, mobile devices in the coming year or two.