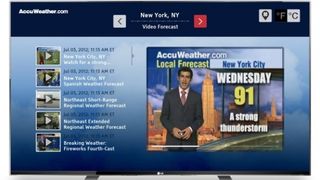 Virtually everyone is talking about “Smart” TVs, as the savior of TV set sales. HDTV is now considered old hat and there’s little content (or patience among viewers) for the 3DTV option. I’m talking about televisions with an Internet connection that allow the Web to be seamlessly displayed and leveraged in new and exciting ways on the TV screen.

Heretofore, however, creating interesting applications, some call them “widgets,” for these new types of interactive televisions has been time- and labor- intensive, because developers have to create the app, then test it multiple times on the variety of TV sets out there. So, they rightly want to develop for the most popular platforms (like Apple TV, Goggle TV and Yahoo!, to name a few). Or they had to gamble on one or two brand of TV that they saw as the most popular with customers. This has hindered the availability of a large selection of apps like we now see on “smart” cell phones.

A group called the Smart TV Alliance is looking to make these unique application developers’ lives easier by bringing all of the related industries together to discuss and create a standard way of doing so. It’s also hoping to sell more TV sets.

This summer the group, which was founded by TV set makers LG Electronics and TP Vision (the new owner of Philips’ TV business), released version 1.0 of a new software development kit (SDK) that they hoped would encourage developers to make interesting platform-independent apps based on standards like HTML5. Using open HTML-based solutions, they say, ensures the SDK’s flexibility and allows Alliance members to select their own preferred technology to create these new interactive experiences. The more applications that become available, the theory goes, the more attractive these new Smart TVs will be to consumers. (It’s all about selling TV sets.)

It looks as though the initiative has had a small amount of success, due to a limited number of companies supporting it. Like with most types of industry standardization SDK initiatives, getting a large number of companies to sign on can be difficult if it is seen as proprietary to one or two companies (in this case LG Electronics and TP Vision). This might be the case here. Financial politics might also be hindering its widespread adoption.

That being said, the Alliance is working hard to expand with new members that bring expertise from different areas of the Smart TV industry and has said it will publish specifications for version 2.0 of the SDK by the end of this year. Thus far the founding Smart TV manufacturers (as well as several Japanese and Korean CE companies that are said to be joining soon) have welcomed Qualcomm and MStar, representing the hardware device side, while YuMe, a provider of video advertising software and services, is offering its experience working with interactive advertising.

“This is an important step for the industry,” said David Hwang, president of Obigo, a Web browser provider and application developer. His company has created apps based on Alliance SDK 1.0 specifications that run on TV sets from alliance members. Consumers can now use these apps, including those from Accuweather and Vilanoise, if they own TV sets made by Alliance members. “Being able to work with a much larger install base presents great opportunities for us. Now we can put our energy into making our apps better instead of testing the same app on many different TV sets. We can be a lot more productive this way.”

By adhering to the soon-to-be announced SDK 2.0 spec, the Alliance said developers will be able to understand what capabilities to expect on 2013 products and plan their application development accordingly. It will also offer content owners and developers the opportunity to get closer to viewers and directly sell them more stuff. That’s what today’s’ social media ecosystem is all about, right?

After the specifications are announced, and there is no hard date, the new SDK will be available for download.