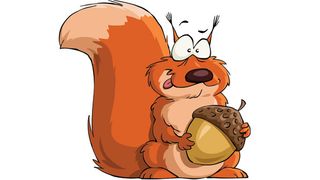 October was Squirrel Awareness Month, and in its honor, CommScope released an infographic about those bushy-tailed balls of energy. I love to watch these animals as much as anyone. However, I also know how damaging they can be around the home. What I didn’t realize was how problematic they can be for overhead and outside wiring and cable.

Did you know, for example, that unless squirrels file their teeth down through chewing, their teeth can grow up to six inches a year? Dracula on steroids!

What I do know about squirrels is that they’ll chew on about anything. A neighbor’s gutters look like they were blasted with a shotgun. Squirrels use the galvanized guttering as files to keep their fast-growing teeth in check. Works well for them. For the guttering—not so much.

Then there’s the PVC drainage piping I use to move the rain water away from my house. It too is peppered with holes. The little varmints chew on the PVC piping to grind down their teeth with the result that the water spills out instead of being routed for proper drainage.

Squirrels claim an area, usually one to seven acres in size. If you decide to trap and relocate, you have to relocate the squirrel at least a three miles from your home. Even further if you are in a heavily wooded area. An ideal location would have a natural barrier, such as a river or lake. If you don’t have that, maybe a moat around your house would work.

The largest concentration of squirrels in the U.S. is in Washington, D.C. in Lafayette Park across from the White House. (Editor’s note. Squirrels, i.e. nuts in DC? Why am I not surprised?) Locals call D.C. the "Squirrel Capital" of the World.

There are more than 250 varieties of squirrels and they come in a diverse range of sizes. The largest squirrel is the Ratufa, sometimes known as the Indian giant squirrel, which can grow to three feet in length. This species is found in southeast Asia and parts of Nepal.

The African Pygmy is the smallest squirrel in the world with a head and body length of only two and half inches. They are found in Southeastern Nigeria, Cameroon, and Gabon.

Now, that you know more about squirrels, what if you need to install some drop cable and you’d rather not have these furry creatures sharpen their teeth on your expensive cabling. Is there an answer?

According to CommScope, they have a solution to squirrels and other vermin chewing the insulation of electrical cables. It’s called Alternative Jacketcabling. It’s really cool, I mean really hot.

The cable jacket is coated with a combination of capsaicin, which is the active component of chili peppers and Bitrex, a bitter-tasting anti-chewing agent. The capsaicin used in these cable jackets is rated at 16 million Scovilles. Compared to a typical Jalapeno pepper, which is rated at only 8,000 Scovilles, that level of hotness should send the pesky squirrel running for water.

I considered asking for a sample of the cable, just to taste it. Uh, probably not a good idea.