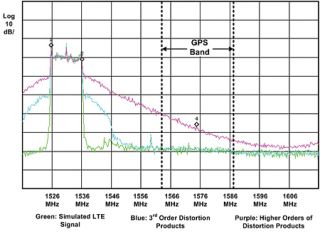 More than 3,000 comments were filed with the FCC concerning test results of GPS receiver performance with two LTE signals. The Test Plan, developed by the GPS Coalition and Light Squared, was summarized in a final report by LightSquared and submitted to the FCC on June 15. The actual work was carried out at several commercial laboratories, JPL (Jet Propulsion Laboratory) and several military facilities.

Those signals are 1526–1531 MHz and 1550–1555 MHz while the GPS signal is centered at 1575 MHz and extends from 1559 MHz to 1591 MHz. Those tests proved that most GPS receivers, from handhelds to aviation and high-precision surveying instruments, would be subject to jamming.

LightSquared persuaded the commission's Technical Working Group to conduct additional tests with only the 1526–1531 MHz LTE signal on a limited number of GPS receivers. Those results were much more favorable to LightSquared, so it proposed to initially transmit a single, wideband LTE signal 1526–1536 MHz.

They also claimed that the field strength of their signals should be predicted using the statistical methods used for cellphone coverage, not Line-of-Sight path loss. The GPS Coalition criticized LightSquared for "moving the goal posts during play."

If the FCC were to accept the above proposals by LightSquared, it could consider that LightSquared's original proposal for two LTE signals in the MSS Band would be "in the public interest." This raises serious concerns about the reliability of the GPS System and the accuracy with which positions can be determined in the future as the noise level in the MSS Band near earth increases.

To illustrate, 40,000 towers, each with an EIRP of 1585 watts/sector and three sectors/tower amounts to a total EIRP of 190 megawatts, assuming all transmitters are operating at maximum power of 1585 watts each.

A typical power would be half of this.

Fig. 1: Spectrum of the 10 MH z LTE signal (Green), third-order IM products (Blue) and noise generated in an LNA overloaded by this LTE Signal (Red). While there is no noise in the GPS band due to third-order IM , there is noise from other (higher-order) nonlinearities. The FCC comment periods are over, so we have all the information, which is going to be available for the decisionmakers at the FCC. All parties agreed there would be too much jamming with the 1 dB loss of SNR criteria and the Line-of-Sight algorithm to predict the areas within which jamming would result with these two LTE signals.

They do not agree jamming would be at an acceptable level with one LTE signal. Most parties commenting advocate more testing before the FCC takes further action.

In my opinion, these two contentious Planning Factors—SNR change and Propagation algorithm—must be settled by the FCC before any further testing is carried out. If both sides cannot agree on these metrics, further testing will not serve any purpose.

Any further tests should be designed to determine the interference mechanisms in play so that receiver designers will know their design problems. The FCC has a spectrum utilization committee, which is now studying all the test data. When they will finish these studies is not yet known.

The test plan agreed upon by LightSquared and the GPS Coalition was designed as a pass/fail test of the two proposed LTE Systems. That system would have contributed 20 MHz to the 500 MHz of spectrum sought by the FCC for broadband within a very short time frame.

The revised proposal now on the table is for an initial 10 MHz bandwidth system. This obviously would not fulfill the commitment from LightSquared of nationwide coverage for almost the entire population; nor could it furnish the same return on investment to its stockholders, but the capital requirements would not be significantly reduced. Finding another 10 MHz of spectrum would be required. Where is it?

I have simulated the single 10 MHz LTE signals in my laboratory using pairs of ATSC signals on adjacent UHF channels. That simulation showed that, when a low-noise amplifier is overloaded, it will generate noise across the GPS Band. This is shown in Fig. 1.

That noise is not third-order, nor fifth-order inter-modulation products. Normally, IM products above third order are so small they can be ignored; but not in the case of GPS receiver front-ends, I believe. GPS signals are received on or near earth over a Line-of-Sight path at –130 dBm power, about 50 dB lower than what suffices for DTV transmissions.

In the case of GPS signals there is negligible sky noise, but the receiver-generated noise is about the same as for DTV receivers. The difference is that GPS signals employ spread spectrum modulation, which improves the SNR by 50 dB. This is how the GPS receivers can work with such faint signals as are available from 25 watts EIRP over a range of 12,000 km from spacecraft.

The comments indicate that the LightSquared signals may enter GPS receivers at –30 dBm. So they are about 100 dB stronger than GPS signals, (D/U = –100 dB). Compare that to the D/U for adjacent channel DTV signals, which the FCC limits to –28 dB.

GPS receivers do not have enough RF selectivity to reject such strong Adjacent Channel Interference (ACI). Here LightSquared claims the manufacturers needlessly cut corners when they should have known that someday the FCC would allow terrestrial transmitters to operate in the MSS Band. They have claimed that such filters, if available might cost only 5 cents.

The GPS Coalition says that no known technology can produce a filter that meets these requirements with acceptable insertion loss across the GPS band, and has acceptable differential group delay.

Other problems have just surfaced. The spectrum below 1525 MHz is allocated for aeronautical radio telemetry. Would LightSquared signals (1526–1536 MHz) interfere with these telemetry signals? What about the Return Beacon Emergency Radio allocation: 1544–1545 MHz. Would this be jammed? These issues must also be addressed by the FCC.

If the FCC approves the present proposal, one 10 MHz LTE signal, it will be years before improved GPS receivers can be made available, and even more before most of the 500 million receivers now in use can be replaced. During this transition period, the perceived reliability of the GPS system may suffer. That perception can never be salvaged. a risk the FCC must weigh.