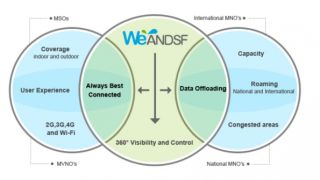 Time Warner Cable (TWC) has adopted technology from WeFi Inc. in Denver as a network management system for its extensive Wi-Fi network.

Time Warner Cable is one of the nation’s largest providers of video, high-speed data and voice services, connecting more than 15 million customers to entertainment, information and each other.

Adapted for cable operators to manage the onloading of data traffic to their Wi-Fi services, the WeANDSF system allows Time Warner Cable to set network management policies and priorities. It optimizes data traffic and utilizes all types of Wi-Fi networks, such as public hotspots deployed by TWC Wi-Fi and its CableWiFi partners, home and office networks and millions of other public Wi-Fi spots.