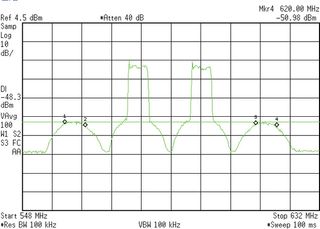 In my last column, I discussed the FCC's recent decision to no longer accept any applications for Channel 51 because it believes DTV signals on that channel may cause interference to Block A (former TV Channel 52).

When the FCC re-allocates 120 MHz of TV spectrum to broadband wireless, Channels 31–51 will probably be gone. This means up to 672 broadcasters currently using Channels 31–51 may need to shift channels or they could discontinue broadcasting.

The FCC might decide not to accept requests for the former broadcast Channel 30 and seek to shift stations now using Channel 30 to some other channel. A better alternative would be to re-allocate channel 38–51 to broadband leaving broadcasters channel 2–36.

Channel 37 is now reserved for radio astronomy and certain medical uses. I believe this reservation will remain in force. This makes Channel 37 the ideal guard band between high-power DTV and low-power wireless spectra.

But is creating a 6 MHz guard interval between powerful DTV signals, and much lower-power broadband signals going to solve interference problems? It would certainly eliminate one source of interference in Channel 31, but there are other interference mechanisms in play here and they can affect many channels, not just 31.

If the designers of cell phones use integrated circuit or silicon front-ends similar to those in modern DTV receiving appliances, the answer is no! Silicon tuners are tiny and they use very little power, but they generally lack RF selectivity letting strong (DTV) signals below Channel 31 reach and overload the mixer.

There is nothing about such interference in the FCC Rules, nor is it mentioned in the ATSC Guidelines document A/74.

I will present a paper at the IEEE Conference on Consumer Electronics in January in which I will explain this interference mechanism and report on my experiments with 26 NTIA-approved converter boxes, which showed that interference to DTV reception by other DTV signals on certain pairs of channels is a significant and overlooked problem.

Fig. 1: Spectrum plot of DTV signals on Channels 32 and 35 with third-order distortion products on Channels 28, 29, 31 and 33, 34 and 36, 37, 38, 39. Channels 27 and 40 are free of distortion products. Markers 1 and 2 denote Channel 29, markers 3 and 4 denote Channel 38.
In addition to DTV sideband splatter into adjacent spectrum, there is another source of noise jamming built into receiving devices that have poor RF selectivity. Two DTV signals on certain pairs of channels can generate third-order distortion products, which fall in the 700 MHz wireless band. This has previously been reported in this column, and more importantly, described in an IEEE paper "IEEE Transactions on Broadcasting," (December, 2010) by Steve Martin of the FCC Laboratory.

When the FCC repacks the broadcast spectrum, I expect the displaced stations will largely be packed into the remaining UHF spectrum. They would be allocated presently un-used channels. These may be those certain pairs identified in Table 1 that can cause interference to wireless receivers. Where will all those "white spaces" have gone?

The spectrum of the third-order distortion products generated by signals on Channels 32 and 35 is shown in Fig. 1. Each third-order intermodulation distortion (IM3) is three channels wide, which is shown in more detail in Fig. 2 where the center frequency is Channel 38. The noise power in the outer two channels is only a few dB below the noise power in the center channel, which is the channel number in Table 1.

I suspect that many cell phones using any of the three channels with these third-order distortion products may experience jamming. Therefore, it is in the interest of cell phone designers to recognize this problem while these new phones are being developed.

My experience in testing NTIA-approved converter boxes of 2008 vintage shows that most of them are nearly as vulnerable to jamming when tuned to any of the three channels where these distortion products fall.

By Nov. 30, further tests of GPS receivers for vulnerability to LightSquared use of 1526-1536 MHz are scheduled to be completed. Recently, LightSquared has claimed that the entire interference problem has been solved by the engineers at Javad GNSS. Receivers from that firm may be tested in addition to those previously tested and if so, it is understandable that the testing might take longer.

Charles Rhodes is a consultant in the field of television broadcast technologies and planning. He can be reached via email at cwr@bootit.com.