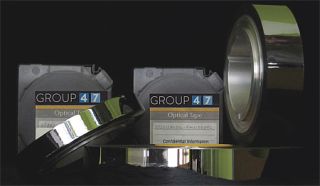 Artist Jackson Pollock said, "New needs need new techniques." Jackson Pollock was known for the "random" nature of his paintings. While random, they still held together as a whole work.

In this column I'll recount a few random things I saw at IBC2011 in September, in Amsterdam. It is definitely one person's view and incomplete. It's just some of the things that I spent some time on, but hopefully gives you a flavor.

I like the IBC convention. While it is smaller than the NAB Show, it is still big enough that all the major players are there. The pace seems slower and people are actually able to get together and talk more. I recommend getting out to it sometime if you haven't already.

Of course, the term "SOA" (Service Oriented Architecture) was seen even more than ever. The Framework for Interoperable Media Services (FIMS) initiative by the AMWA and the EBU showed a working demonstration of the framework in action with products from multiple vendors integrated into a single working system with common interfaces. Many other vendors also touted their SOA credentials.

There remains some confusion about the definition of SOA, and I did see a couple of instances where the simple use of Web service interfaces was mixed with SOA.

It does seem however, that as the industry moves even further towards software-based solutions running on commodity hardware, understanding and adoption of the concept is growing.

Since the first demonstration of UHDTV (Ultra-HDTV) at IBC in 2006, I have been fascinated watching the growing capabilities of this format originally developed as Super Hi-Vision by NHK.

This year, in the Future Zone and New Technology Campus, I had the opportunity to see a true end-to-end set of technologies for producing live broadcasts.

Each year, the camera technology displayed gets more solid and the variety of displays increase.

I also saw a 22.2 live audio mixing console and a reasonably featured UHDTV production switcher. It has come a long way from the original prototypes that were cobbled together with many cables just to move signals from place to place. UHDTV really produces quite beautiful images. You must see a demonstration of it if you haven't already.

Interestingly, the coolest thing I saw this year was also displayed in the Future Zone and New Technology Campus and it has immediate and extremely valuable applicability if the technology is fully commercialized.

It is a system called "DOTS" or Digital Optical Technology System. Group 47 LLC recently acquired the technology from Eastman Kodak.

I would simply describe it as a metal data storage format that seems like it could last for centuries—low-cost, environmentally friendly storage. It could revolutionize the way data is stored in long-term archival situations.

It can be formed into LTO-compatible "tape-like" reels that would work with existing robotic systems. But it can also be used in many other form factors as might be appropriate for a specific application.

While I don't have all the details, the material can be heated with a simple red laser, like that used in DVDs. This changes the reflective properties of the spot. To my eye it looked like an etched image, but it was smooth. It can be read with the human eye and, of course, inexpensive camera sensors like CCDs. The company says it can store up to 2 GB on a single LTO-format cartridge with current technology.

And, did I mention it is metallic, doesn't need highly specific storage environments and will still last for centuries? Wow. I will definitely be watching to see if this goes somewhere.

Of course, I saw many other things as well, including an excellent presentation on the advantages of shooting 3D films in 2D and post processing to achieve depth. A compelling case was made.

There were "2nd Screen" applications everywhere. We are definitely working with more than one screen in many cases in broadcasting these days.

Media asset management (MAM) technologies continued to mature. Software as a Service (SaaS) offerings were more visible from multiple vendors for everything from transcoding to editing to graphics.

Some real advances were obvious in technical standards and their adoption. I saw closer cooperation between key industry organizations like the EBU, SMPTE and the AMWA. Always a good thing.

Conferences and the latest buzz words will always come and go, but we will see technology continue to advance each and every year. You can Count on IT!

John Footen is head of Cognizant's Broadcast Consulting practice. He is also co-author of the book "Service-Oriented Media Enterprise." He can be reached at john@footen.tv.