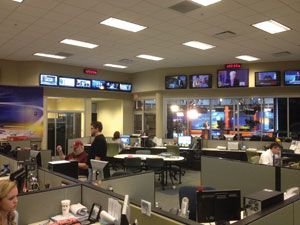 The new building, which previously was a Barnes & Noble bookstore, houses both studios and control rooms, each with separate master controls. All share one broadcast core and a central newsroom.

Television Park houses WJBF-ABC and WAGT-TV. The newsroom is equipped with the ability to monitor regional, national and local news feeds, allowing producers to keep up with what’s happening outside the walls of the building.

In the process of designing the newsroom, both stations needed the flexibility to route any off-air channel or house source into any given monitor in the newsroom or studio, or to other staffers and locations in the facility. The distribution system needed to be scalable for adding new viewing locations within the facility in
the future.

Using HD-SDI for distribution was considered at first, but it was expensive. Each drop required a home-run feed with re-clocking as needed, a dedicated output on the HD router and an HD-SDI interface for each prosumer TV.
Instead, it was decided to route HD-SDI as 1080i HDTV channels over a facility-wide RF network. Contemporary Research’s QMOD-SDI HD-SDI modulator was the key to the solution. In the past, this option was out of the question, as converting SDI to digital cable channels required several components linked together at a cost of about $12,000 to $15,000. The QMOD-SDI does it all — HD-SDI 1080i/720p ingest, MPEG encoding and RF QAM channel output — for less than $3000 per channel.

Figure 1. WJBF and WAGT employ five QMOD-SDI units, which are fed from a central SDI router.

In this application, five QMOD-SDI units were employed, fed from the central SDI router, with the option to add more router/RF channels in the future. (See Figure 1.) What was gained is a virtual HD-SDI video switcher that uses RF to reach any number of users at the site. Any input can be sent to any channel at any given moment, so anchors and staff in the newsroom can view anything on the system, including live studio video and broadcasts from local and national news programming.

Integration was easy to perform. The five modulators and the QCA9-33 active combiner from Contemporary Research took up only three rack spaces, generating minimal heat and drawing little power. The front-panel text display and menus made it easy to define the frequency and options for each channel. After combining, the QMOD channels were then merged with other QAM channels on the in-house cable system. The site can easily add four additional channels on the existing combiner, and can add more with additional combiners.

The only video and control technology needed for each user was a standard HDTV display and the channel up/down buttons on the remote controller. In addition, the site can easily add new channels and branch the RF coax feed to new TV monitors in the future.