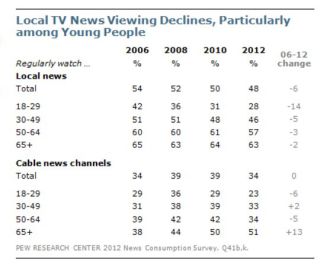 The transformation of the nation’s media consumption landscape is beginning to take a toll on traditional television news after already diminishing the influence of print media — especially newspapers, a new report from the Pew Research Center has found.

So far, Pew said, television is holding on to its audience but is increasingly vulnerable, particularly with the next generation of news consumers. Among adults younger than 30, as many consumers now get their news from a social networking site as on a television set. Online and digital news consumption continues to increase, with many more people now getting news on cell phones, tablets or other mobile platforms.

The most dramatic change, Pew found, is the rise in the power of social networking in television news. The percentage of Americans saying they see news or news headlines on a social networking site has doubled — from 9 percent to 19 percent — since 2010.

The findings are from Pew Research Center’s biennial news consumption survey, which has tracked patterns in news use for nearly two decades. The latest survey was conducted May 9 through June 3, 2012, among 3003 adults.

The proportion of Americans who read news on a printed page — in newspapers and magazines — continues to decline, even as online readership has offset some of these losses. Just 23 percent say they read print newspapers — off by about half since 2000 when 47 percent were readers.

Yet, as print suffers, television news viewership has remained more stable. Currently, 55 percent say they watch the news or a news program — little changed from recent years. But there are signs this may also change. Only about 34 percent of those younger than 30 say they watch TV news.

In 2006, nearly half of young people said they watched TV news. Among older age groups, the percentages saying they watched TV yesterday has not changed significantly over this period.

The changing demographics of the TV news audience are particularly noticeable in the audiences for local and cable news. The overall share of Americans saying they regularly watch local television news has slipped from 54 percent in 2006 to 48 percent today.

However, the number of 18-to-29 year-olds regularly watching local news has fallen from 42 percent in 2006 to 28 percent today, Pew found..

Over this same period, the regular audience for cable news also has aged. In 2006 and 2008, there were only modest age differences in regular cable news viewership. But in the current survey, more than twice as many of those 65 and older as those younger than 30 say they regularly watch cable news (51 percent vs. 23 percent).

In the current survey, 41 percent of all adults — including 47 percent of online adults — said they used Facebook or another social networking site.

The increasing popularity of social media sites for news is not limited to young people. In fact, those in their 30s are nearly as likely as those 18 to 24 to say they see news or news headlines on Facebook or another social networking site (30 percent vs. 34 percent). And about a quarter of adults in their 40s see news on social networks, up from just 8 percent in 2010.