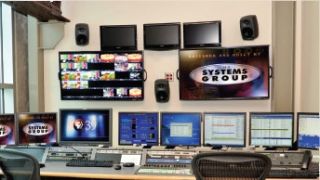 When civic leaders from Bethlehem, PA, decided to redevelop the old Bethlehem Steel mill into a new community center, it provided the town with a sorely needed reclamation project to boost the local economy. The new “Steel Stacks” arts and cultural campus also provided a new home for WLVT, the local PBS affiliate (channel 39), which would bring it closer to the local community and increase ratings for its local HD newscasts.

A new two-story 29,000sq-ft building was constructed from the ground up, giving the station a chance to start from scratch and implement an end-to-end, file-based workflow.

The new master control suite overlooks the street level of the new complex, where a large Panasonic LED display (15.54ft by 9.45ft) outside the building shows WLVT programming, announces upcoming community events and is a live feed when production is going on in the studios.

The building also features extra space in the form of an Educational and Cultural Center, which is open to outside clients to rent space and produce interviews in the production studio and distribute them via a 4.9m satellite dish on the roof. Clients can also finish programs in the FCP and Avid suites.

For the local community, the new building is a welcome addition, and the station's newscasts ratings are sure to get a bit more competitive.