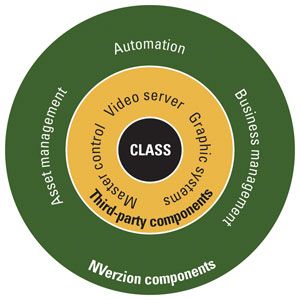 As broadcasters evolve to completely file-based workflows, they increasingly rely on station-in-a-box (SIB) automation systems. SIB systems collapse many of the pieces that constitute a traditional master control and playout chain — including switchers, servers, graphics/channel branding, automation, and traffic/business service — into a single software platform powered by generic IT-based hardware. Although SIB systems provide simplicity and fast deployment, broadcasters are challenged to find a more robust solution that is capable of repurposing existing hardware in addition to offering easy scalability, a high level of reliability, full redundancy and guaranteed interoperability.

The NVerzion CLASS (Component-Level Automation System Solutions) automation platform leverages partnerships with third-party companies in order to deliver a more seamless end-to-end broadcast experience for stations and viewers. Recognizing that a broadcaster relies on five key components (a router and/or master control, video server, graphics, automation and traffic/business service) to successfully transmit and manage its operations, CLASS offers all these products in one complete package. Alternatively, it works with a broadcaster’s existing infrastructure and third-party hardware to offer a comprehensive platform, allowing broadcasters to capitalize on ROI for already purchased equipment, as shown in Figure 1.

Because the automation system can be easily implemented into an existing infrastructure, broadcasters have the flexibility to work with a variety of solutions, selecting the equipment that best meets their needs. Although many of today’s SIB automation systems do not integrate with a station’s business service or traffic system, the system has a central component related to sales and revenue. It also fully supports the Broadcast eXchange Format (BXF), therefore providing the full circle of continuity between the station’s engineering and sales operations.

The automation system is based on a modular design that provides two key benefits to a broadcaster. First, there is no single point of failure. The flexible architecture enables a user to bypass any piece of equipment that isn’t functioning correctly. If the graphics component fails, the station can bypass the graphics and still maintain the on-air signal.

Second, a station can determine how the automation is going to be used, down to the component level. A broadcaster can set up a single or multiple workstations dedicated to acquisition, preparation and distribution, and multiple users can simultaneously access the system. These workstations can be located anywhere in a facility, making the automation system easier to use and increasing a broadcaster’s efficiencies.

The system is also scalable, an essential feature as today’s broadcasters are increasingly adding and acquiring new channels. It allows a broadcaster to easily add new channels, without purchasing another workstation for each new channel. This means a broadcaster can control a large number of video servers from a single automation system, rather than operating a different automation box for each server.

The scalable architecture also enables a station to more efficiently manage its overall inventory, as media is recorded once played out once, and can easily be shared by all common platforms. By controlling a variety of components from one central platform, a broadcaster eliminates information overload, which decreases errors and increases reliability in delivering a high-quality television viewing experience.

As the broadcast industry continues to evolve, and new compression algorithms and technologies like 3-D graphics are introduced, it is even more important that stations deploy a reliable automation system capable of supporting these technologies and, in turn, generating revenue. Although IT-based automation systems are proficient at handling a specific task, they generally don’t perform well when new processes are introduced.

—Philip Reid is director of engineering at NVerzion.