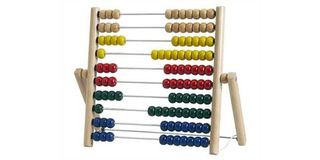 CALCULATING -- Numbers don’t lie, they just lay there while we apply all sorts of meaning to them. So here’s some fun numbers from this week...

While TVs made of Saran Wrap were rolled out at International CES, the world’s largest incubator of hard, plastic waste, BBC News reported that more than 13,000 households in the United Kingdom are using black-and-white TVs. London leads the way with 2,715. It could be due to a license to watch black-and-white TV costing a third of what a color license costs. Or, as one official said, “There will always be a small number of users who prefer monochrome images, don’t want to throw away a working piece of technology or collect old TV sets.”

The figure represents a fraction of a percent of the 25 million TV licenses in force, and roughly correlates with the average number of people who are entirely color blind.

Across the pond, the U.S. Federal Communications Commission released the current total number of broadcast TV and radio stations licensed nationwide. (Stations are licensed here, as opposed to viewers in the U.K.) As of Dec. 31, 2012, there were 15,196 AM, FM and public radio stations, and 8,390 full-power, low-power, Class A and translator TV stations—reaching nearly the entire population of the United States, which clocked in at more than 315.1 million as of 12:41 a.m. EST, according to the U.S. Census Bureau.

Of those 315.1 million people, a fraction of a percent—roughly equal to the portion who are color blind—will fly on a commercial flight in 24-hour period, figures from the Bureau of Transportation Statistics indicate. This fraction of one percent of the population is being inconvenienced by the remaining 99.9-plus, FCC Chairman Julius Genachowski declared at the Consumptive Electronics Saturnalia in Las Vegas.

The good chairman said that slow Wi-Fi at airports was simply unacceptable, according to a slightly exaggerated interpretation of on-site coverage. TWICE’s Joseph Palenchar reported that the chairman, who likely did not take the Megabus to Vegas, said more spectrum would “relieve congestion and improve Wi-Fi speeds at conferences, airports and ultimately peoples’ homes.” This additional spectrum is supposed to come from sharing arrangements with government agencies such as the Department of Defense, which had 24,000 files stolen through wired networks in 2011. Fortunately, Wi-Fi is super-duper secure, so that won’t be a problem with shared spectrum.

Elsewhere at the Consuming Energy Shingdig, lots of really huge TV sets were introduced. Sharp rolled out what was described by show organizers as “the largest LED TV on the planet,” a 90-inch Aquos eyeball incinerator. It can be had for $11,000; same as a 2012 Nissan Versa, and a relative deal compared to the 84-inch 4K LCD Sony rolled out earlier this year for $25,000.

As set makers come close to exceeding the wall size of the average American living room, Sony is progressing toward TV wall covering with really, really thin TVs in the form of organic light-emitting diode displays. Sony is not giving up on OLEDs despite an industrywide production yield of around 17 percent, a source told Gary Arlen, intrepid reporter. Sony showed a 56-inch 4K OLED display, literally inching out 55-inch models from Samsung and LG, both of which were merely HD, a paltry one-fourth of the resolution of 4KTV, also kind of known as “Ultra HD,” but not really.

Meanwhile, precisely zero programming distributors are pumping out anything in 4K, and more than half of U.S. households with HDTV sets watched primetime in finger-paint fuzzy standard definition, according to Nielsen. Broadcasters alone offer free, unadulterated HD content, while pay TV operators charge a premium for something like it. Yet even more numbers suggest both are on the decline.

Pay TV peaked two years ago, paidContent tells us with data from The Diffusion Group. Subscribership is forecast to fall from 100.9 million last year to 95 million by 2017, a difference of 5.9 million, or 1.3 million more than Cox Communications, the fifth largest MSO in the country according to data gathered by the National Cable & Telecommunications Association.

Broadcast TV fared no better in graphic from Nielsen this week. The illustration says over-the-air TV “device ownership” fell to 9 percent last year from 16 percent in 2003. It is unclear, however, if the number reflects a decline in reliance on broadcasting, or that it’s virtually impossible to buy a “broadcast-only” TV set, and that 9 percent of U.S. television households are sticking to their fat, chunky old cathode-ray tubes. The one certainty about these numbers is that they are not black and white.