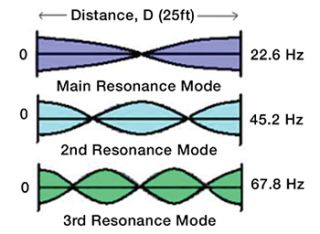 Sound has dimension, and it's sometimes easy to forget just how big sound can be.

It's easy to visualize the scale of sound dimensions simply by looking at musical instruments. Compare an upright bass with a mandolin, for example, or the low register organ pipes with the higher ones.

It should come as no surprise then, that in a room, low-frequency sound might "behave" differently than higher frequencies. It's all a matter of dimensions.

At the lowest frequencies, generally under 300 Hz in typically sized control rooms, the response in the room is considered modal. Here's where the effect of standing waves between and among surfaces is most pronounced.

Fig. 1: Fundamental, second and third room resonance modes for a room 25 feet in length. Note peaks at the walls and nulls within the room. Let's consider a rectangular room with the largest dimension (length) of 25 feet. The first room mode is at a frequency with a wavelength of twice this distance, or 22.6 Hz. Subsequent room modes are whole number multiples of this frequency (45.2, 67.8, 90.4, 113 Hz, etc.), (see Fig.1).

While there are formulas to figure out these modes, there are fortunately calculators available on the Web to make this process easy. Here are a couple of them:

A good way to get a feel for room modes is to listen. Feed the output of a sine wave oscillator through the room's sound system, but in only one channel. Start with a lower level first, and slowly bring up as necessary. Set the oscillator frequency to a calculated room mode.

For our sample room, to listen to the first room mode for the 18-foot width, set the oscillator to around 31 to 32 Hz at a fixed level. Then walk the room and listen to how the level of the tone changes as you walk from the back to the front of the room (or the other way around).

Assuming you can hear this low a tone, you should hear it loudest at the front and back walls, with level decreasing as you walk toward the center of the room. In the middle of the room, the level should drop to zero. This will happen no matter how much you raise the level of the sound you're putting into the room (don't overdo it on level).

Doubling the frequency (62.8 Hz in our example) creates two null points about a quarter of the room width away from each wall, and a peak in the center of the room, as well as at the two walls. Try other room mode frequencies, and you'll quickly get a sense of where the distinct peaks and dips occur and at what frequencies the response starts to smooth out.

Note: While you're doing mode testing, listen also for extraneous rattles set in motion by the low-frequency acoustic energy. It's not uncommon for lighting fixtures and ductwork especially to resonate with particular frequencies.

When you do mode calculations for different-sized rooms, you'll see that small rooms by nature of their size can't provide a smooth bass response. In small rooms, the first room modes are within the audible range of hearing and are separated (or isolated) from other early modes. Also as illustrated in our example room, isolated room modes can occur almost on top of each other (like the 90.4 Hz and 94.2 Hz modes in the length and width respectively).

As much as they're preferable, large rooms aren't always available or practical. So knowing where low-frequency modes fall will help you place your mixing and other listening positions so that they don't fall in distinct nulls or peaks.

Imagine you're sitting in a 100 Hz null trying to correct that deficiency by boosting that frequency with your equalizer. Not only won't you hear the result, but you've most likely added too much bass boost in your mix.