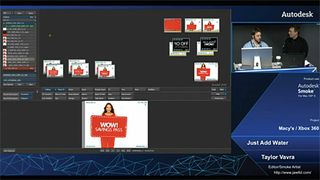 Ever since mid-town Manhattan boutique post-facility Just Add Water installed the Autodesk Smoke for Mac software as their main finishing system, editor and Smoke artist, Taylor Vavra, says that 98 percent of the work they previously had to outsource to other service providers is now staying in-house.

It's a good thing, too, because, with a workload that includes more than 400 spots for Macy's alone, Just Add Water has kept its six-member editorial staff swimming.

The six other editors at Just Add Water mainly use Avid Media Composers for creative offline. Although Taylor augments his capabilities with Apple Final Cut Pro, all the high-end finishing is accomplished on their Autodesk Smoke.

"It's sort of a different animal," Taylor begins, "but since it supports both ProRes and DNxHD files, our Smoke integrates seamlessly with our other systems."

"I got here about five years ago, and back then we were using a variety of post-production software applications," Taylor says. "We were constantly import/exporting footage from one system to another. But things have become greatly simplified now that almost all of our finishing can be done with Smoke for Mac."

Vavra demonstrates on YouTube how he created some Macy’s spots Even though his Smoke for Mac software is loaded onto a 3 GHz, quad core Macintosh Pro system running OS 10.6.6 Snow Leopard with an AJA Kona 3 card, Taylor tells us that it is the unique Smoke interface that lets him work so quickly.

"It's streamlined, and made for an artist who needs to work through a variety of challenges all in one system," Taylor says. "With the new Smoke 2012 version, I have direct access to Flame effects, and the image processing and synthesis effects I get from GenArts' Sapphire plug-in package opens up a lot of other vfx opportunities."

The main work area on Smoke GUI is the Edit Desk. Taylor values the fact he can exit a scene from the timeline, place it on the Edit Desk, generate effects, and then return it to the time line. The Edit Desk is always accessible, and means he is not restricted to performing all of these actions in the timeline as with many other systems.

Just Add Water shares its building with a color-correction facility called Out of the Blue, and Taylor can access colorist Micah Kirz's SAN storage on his desktop. Now they can color correct, finish, and produce master tapes even on a complex project within eight hours.

Having this power on a single workstation can help keep clients happy, especially on recurring projects.

Recently, Taylor had to replace the type on a Macy's campaign's store coupons to fit various promotions in several different languages, and found Smoke's corner pin tracking capability indispensable. You can see examples in Taylor's editing reel on the Just Add Water website, and he provided a video tutorial about the process from the Autodesk booth during the NAB Show, which you can view at www.tvtechnology.com/08-10-11.

Smoke was first seen as a turnkey system on the SGI Octane platform at IBC1997 running on IRIX. The software-only version for the Mac OSX debuted at the International Broadcast Equipment Exhibition (Inter BEE) in November 2009. It made its U.S. debut at the NAB Show in 2010 under the moniker of Smoke 2011. Keeping with their tradition of jumping a year forward in naming their releases, the version we saw at the 2011 NAB Show was called Smoke 2012.

Taylor Vavra Smoke 2012 benefited from a redesigned 3D lighting system in its Action compositing environment, and, although Taylor has not yet had a chance to explore it, a comprehensive stereo 3D toolset for editing, monitoring, compositing and delivering S3D productions.

"It's primarily a finishing system," said Maurice Patel, entertainment industry manager at Autodesk, "but obviously it is also a very powerful editor. Smoke can ingest almost all major video formats from H.264 out of DSLR's to full-resolution R3D files from Red Digital Cinema cameras, but we convert them internally into an RGB color space for maximum output quality."

Although most high-end clients expect to sweeten their audio under the supervision of sound mixing specialists, Taylor has found that his Smoke 2012 system can also handle sophisticated audio work on lower-budget projects.

Taylor is actually a sponsored fly fisherman, and produces instructional DVDs in conjunction with several tackle manufacturers. He likes to keep these projects all on a single system from start to delivery.

"It's all going to happen in our Smoke for Mac system, including 3D graphics, color grading, and audio mixing," Taylor said. "The ability to finish such a wide variety of projects on Smoke 2012 from a 30-second national spot to a two-hour how-to DVD is what makes it so attractive. It's simply all about the speed, efficiency and ease of use that's built into the Smoke system's design."

Jay Ankeney is a freelance editor and post-production consultant based in Los Angeles. Write him at JayAnkeney@mac.com.