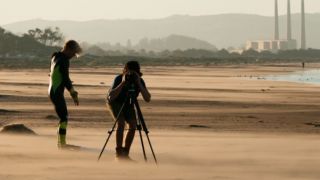 Filmmaker Kellen Keene is dedicated to documenting artistic endeavors through his visuals. Recently, he was inspired to go behind-the-scenes with surfer and photographer Chris Burkard to show what it is like to be a surf photographer and to showcase how some of the images Burkard shoots are made. Keene knew every shot had to be in-the-moment, so he wanted a shooting package that could keep up with the quixotic personality of the surf. Because of those needs, most of the project was shot on the Canon 5D Mark II and Nikon d800s. He also used the new GoPro 3. He had multiple water housings, stabilization gear and various Canon L-series and Nikon glass. For support, Keene’s choice was Sachtler’s Ace M.

Shooting action like surfing makes it critical to get every shot smooth and steady as the camera pans with the subject. Videographers never know which shot is going to produce the exact moment they are trying to capture, so consistency and trust in the fluid head is key, and that’s what the Ace M provides.

The Ace M was strong enough to use with a 12ft jib and light enough to trek up and down the beach in the sand. Shots of Burkard editing photographs in his office were accomplished with a 12ft jib on the Ace that hovered over Burkard's adjustable Wacom screen and photographs.

The Sachtler Ace M has become the go-to support for independent videographers such as Kellen Keene. With an attractive price performance ratio, it helps deliver broadcast-quality images on a one-man-band budget.

The 5-step counterbalance and long 4.1in (104mm) camera plate sliding range facilitate quick balancing of a camera set-up anywhere in the Ace M’s 0lb to 8.8lb payload range. Plus the Ace M head has a +90° to -75° tilt range.