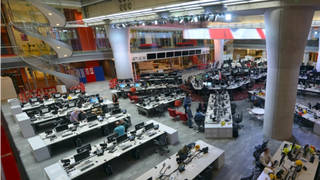 This was one conclusion of a recent seminar organized by the EBU to discuss its Integrated Media Production Strategies (IMPS) initiative. There was broad agreement that integrating technical and editorial production resources and creating a single newsroom for radio, television and online (as some broadcasters such as the BBC have done) is potentially more cost-effective than having separate silos for each. It makes it much easier to produce content tailored for each of the different platforms but still exploits common resources.

Apart from the BBC, VRT of Belgium, YLE (Finland), and NRK (Norway) also described the organizational hurdles they had overcome to amalgamate TV, radio and online news staff around common workflows. According to Simon Ward, assistant editor for BBC News gathering, who runs a cross-platform team called News Intake, job swaps and a strategic prioritization of online had done much to change mindsets.

“In 2008, Online moved to the newsroom," Ward said. "To counterbalance the very powerful TV and radio editors, a multimedia editor position was created. The TV editor and radio editor would serve as daily multimedia editor on a rotating basis. As they wanted to be seen as very scrupulous, they didn't favor their own program or their own platform, but favored online. This helped online gain strength and power in the newsroom.”

VRT met sterner resistance at all levels, from veteran journalists to middle management, according to Brigitte Vermeesch, who managed its News Project to digitize and integrate its radio, TV and online newsrooms. Winning hearts and minds had been difficult, but had been a fundamental element of the strategic to make convergence work at VRT.

In the case of YLE, allowing some people to remain specialized in just radio or TV had helped build consensus around newsroom integration, according to YLE director of news and current affairs Atte Jääskeläinen.

The IMPS program will continue in 2013 with member visits and will specialize in two subgroups — technical and editorial — for about four months in order to analyze workflows and define the technical implications. From the sound of the EBU conference, the editorial aspects may be more important.