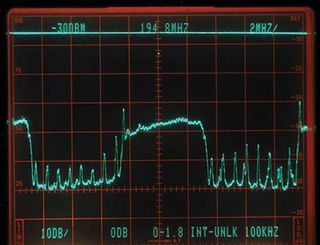 In one of my columns several years ago, I reported on wet baluns and loose F connectors as causes of poor DTV reception. I was pleased and amazed at how many readers wrote me on these topics. One reader kindly sent me a copy of the SCTE Standard 160-2010 concerning F connectors while another wrote that there is a torque wrench for F connectors. Now that I know how much torque to apply to F connectors, I’ve ordered the wrench from tecratools.com.

My colleague Linley Gumm, recently encountered another new reception problem in receiving a Ch. 10 signal. His trouble started suddenly one evening when he discovered interference across the high VHF band that he had never had before. Using a spectrum analyzer, he was able to discern that the interference was so strong that Ch. 10 was lost, although he lives 10 miles from the tower and has a rooftop antenna.

Fig. 1 shows the spectrum with interference. These spikes are the second harmonics of local FM stations. He measured the received power of the FM radio signals from his rooftop antenna to find that the total power (88–108 MHz) was about –5 dBm. But these signals had never generated second harmonics jamming Ch. 10 before.

PASSIVE INTERMODULATION INTERFERENCE
So he investigated further. His antenna feeds a four-way signal splitter in his attic so he re-tightened the F connectors of this signal splitter. Voila, next evening, the interference was gone, (see Fig. 2).

This is known as “passive intermodulation interference,”or PIM. Some of you may remember copper oxide rectifiers, which were used by early radio experimenters as detectors back in the days of crystal sets. Others will recall “foxhole radios” discovered by U.S. soldiers who used rusty razor blades as the detector of a crude “foxhole” crystal radio in Italy. PIM is a significant source of interference in base stations where there are multiple transmitters and a number of very sensitive receivers clustered atop a tower.

Fig. 2: The same spectrum after the FMI was eliminated by lightening all F connectors in the receiving antenna signal distribution system.

Well, now we have a documented case of PIM with FM radio signals being rectified and actually jamming a high-band VHF station’s reception. I’d like to hear from readers who have experienced PIM.

THE LED BULB EFFECT
Another reader experienced yet another form of DTV interference when he reported suddenly losing reception on all the DTV receivers in his home. Prior to the reception failure, he had replaced an incandescent 40-Watt bulb with a new and shiny 8-Watt LED bulb. When he switched that light off, reception returned. His experience intrigued me enough to buy the same brand of 8-Watt LED as his, and I got the same result. I too have a spectrum analyzer, so Linley and I looked for noise near this LED bulb and we found it mostly between 110 MHz and 250 MHz.

I borrowed three brands of LED bulbs of varying power from a local electrical supply dealer and am happy to report that these don’t generate noise—but the 8.5-Watt bulbs both my reader and I had obtained from the same manufacturer, sure do. Those noisy bulbs are claimed to comply with FCC Rules for Class B digital devices.

With most of this noise between 110 MHz and 250 MHz, both aviation radio and DTV on Chs. 7–13 may be affected. Today, there are probably only a few such bulbs in use, but as the cost of these extremely efficient, long-life bulbs decreases, they may become commonplace. I can imagine that radios on aircraft in flight might pick up such noise from perhaps a million LED bulbs as it flies over a major city. Obviously the jamming of these radio receivers would be of short duration, but that will only make tracking the problem more difficult. Remember aircraft radio use AM, not FM, so they are more sensitive to jamming, but not all LED bulbs generate noise so this problem can be solved. Perhaps the FAA might look into this.

Meanwhile, if you have experienced an interesting DTV reception problem, I’d like to hear from you.