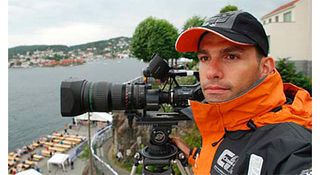 Current assignments:
I’ve just come back from Antarctica for the shooting of a base jumping video for Red Bull. It was a one month long expedition in the Queen Maud Land region of Antarctica and we spent most of our time camping near one of the highest mountains in Antarctica, Mount Ulvettanna.

Shooting the Class 1 World Powerboat Championship Norwegian Grand Prix I also have an ongoing documentary filming project with a British production company. This documentary is about Turkey and Turkish history and it will be broadcast on BBC and Turkish national television (TRT).

Have you been busy?
Yes, I’ve been pretty busy for a few years now. I’m also traveling a lot for various filming projects for other international productions.

Shooting where?
All around Turkey and around the world, from Norwegian fjords to Cambodia’s secret temples.

Where have you shot?
I have been shooting nearly everywhere around Turkey including some mountainous regions, too. I’m also doing aerial work with a motorized parachute (paramotor). My pilot and I used to fly on lots of different historical and natural regions in Turkey. Seeing and filming those regions from the air was a great opportunity. I have been in several countries for different productions.

What types of productions have you mostly shot?
I mostly shoot documentaries. Apart from these, I also work on some TV programs, handle news coverage works and aerial videography. I am also a member of the Class 1 World Powerboat Championship TV crew. I’m responsible for shooting the racing boats with long lenses.

Very soon, I will begin to handle underwater filming, too. I’ve been scuba diving for nearly four years and I believe that now it is time to work with underwater videography.

What was your first ever shooting job?
I began my career while still studying at film school. I was in the on-campus student employment program in my university and I used to work in the studios of our Film & TV department. I shot lots of different videos to supply the needs of the department and the university. I can’t exactly remember my first ever shooting job, but I probably shot a conference as a first assignment.

Most recent, interesting assignments?
Definitely Antarctica! One month filming in Antarctica for Red Bull was the most interesting and exciting job of my career. It was a once in a lifetime opportunity and I didn’t want to miss that. Being and shooting there, seeing penguins in their natural environment, walking in some impressive ice caves was great.

Did you have any difficulties with equipment operating at low temperatures?
We had to work in extreme low temperatures down to minus 30 deg C sometimes. Even under these conditions, our Sony XDCAM EX cameras worked great! We bought some insulated camera covers for our cameras but we hardly ever used those covers. Keeping our batteries warm was the only thing that we had to pay watch.

What are the operational advantages and disadvantages of being based in Turkey?
Turkey is emerging and has begun to have an important role in world politics over the last few years. It’s also becoming a center in the Middle East, too.

My current base city, Istanbul is an exciting city that is full of history and cultural diversity. It’s also the European Capital of Culture in 2010. All of these factors make Turkey a great place for filming about different topics. It attracts filmmakers and documentary producers from all around the world. Another advantage is the developing airline transportation. Istanbul became a transfer center in the region. So, it’s cheaper to travel to different regions all around the world. One of the most important disadvantages is the high price of cameras and filming equipment. It is also hard to find the ones just launched on the market, too.

Current equipment you use?
I mostly use XDCAM and HDV cameras in my shooting jobs.

Other gear you have access to?
I have access to every format of video camera, including Varicam and HDCAM. I’ve also begun using DSLR cameras for the last a few years and they will very soon become one of my most favorites.

What do you think are the problems in using current DSLRs for video shooting? In what areas can they be improved?
Everybody knows that there are some disadvantages in using those cameras for video work: moiré, aliasing, and rolling shutter effects and limited recording time in one recording period are some of those. We now know that all these disadvantages have a solution and will be solved in the following new models.

Even with those disadvantages, they are matchless with their lower prices and big sensors. I think that manufacturers also have to add more options to video menus and improve the audio recording quality/options in the newer models.

Equipment “wish list”?
I’m planning to buy a DSLR, a set of lenses and accessories for my land, aerial and underwater videography work. This is the most compact and suitable way for filling my needs.

What piece of gear do you wish someone might make?
A large sensor compact video camera with a quality lens in an affordable price.

Best thing about your job?
Seeing new places, meeting and working with new people from all around the world and the enjoyment of creating a good visual work.

Worst thing about your job?
Indeterminate working schedule and times.

Dullest assignments and why?
Shooting long and boring interviews. That’s what I called “shooting talking heads” and this is the dullest shooting you can do in this business.

Hairiest/scariest assignments and why?
I was doing some aerial filming of a villa site near the sea in Western Turkey. Flying over the sea is the most dangerous flight we can make. In case of a motor malfunction or a possible problem, the parachute may fail and cause death. That’s why the 30 minute filming flight was one of the scariest and also felt like the longest one.

What country would you most like to shoot in?
Except Turkey, Cambodia is a very interesting country for filming. I’ve always found an interesting moment or structure wherever I turned my lens around.